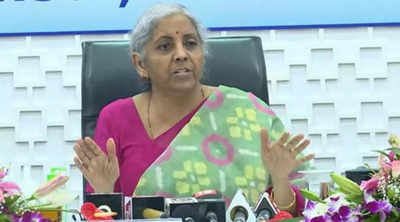 WASHINGTON: Finance minister Nirmala Sitharaman on last Tuesday said the US-India relationship is at its best and will strengthen the global order in these challenging times.

This is one of those times when these two large democracies have found their space and they are comfortable working with each other, she said in a recorded video conversation released by think-tank Atlantic Council.

The US-India relationship is in for very good times and this is only going to strengthen the global order, she noted.

“Although the global order itself is something which we’ll have to look at fresh, considering that multilateral institutions today (are) not really as strong, as nimble, as output oriented, as they were once upon a time…

“So these are changing times. I would think, this kind of relationship between the United States and India are signs of positive development…,” she said.
Citing the recent ‘two plus two’ dialogue between the two sides, she said these are unimaginable developments which have happened in the recent past, where the defence ministers and foreign ministers of both the countries sit and have a discussion over a range of issues.

“So, I think this is one of those times when India and United States, the two large democracies, have found their space and they are comfortable working with each other,” she said.

Observing that the recent Indo Pacific Economic Framework (IPEF) is a fantastic thought which has come from the US, she said India is looking at it and will take a considered view.

It is a very innovative way of engaging with countries in that region–Vietnam, Philippines, Malaysia, Thailand and India, she said, adding it has four pillars.

The four pillars of the proposed IPEF are fair and resilient trade (encompassing seven subtopics, including labour, environmental, and digital standards); supply chain resilience; infrastructure, clean energy, and decarbonisation; and tax and anti-corruption.

“All of them (countries) are being brought on board for the IPEF. So, there is a new traction to this relationship…So these four pillars are cross cutting issues which pertain to the economy, which pertain somewhat to the strategic domain also,” she said.

With regard to regulation around cryptocurrencies, Sitharaman said it is going to take some time as the government is trying to frame a protocol based on wide consultations.

“Many countries have already started looking at coming up with protocols. We need a technological solution to deal with it. I don’t think there is one yet. And it has its own repercussions,” she said.