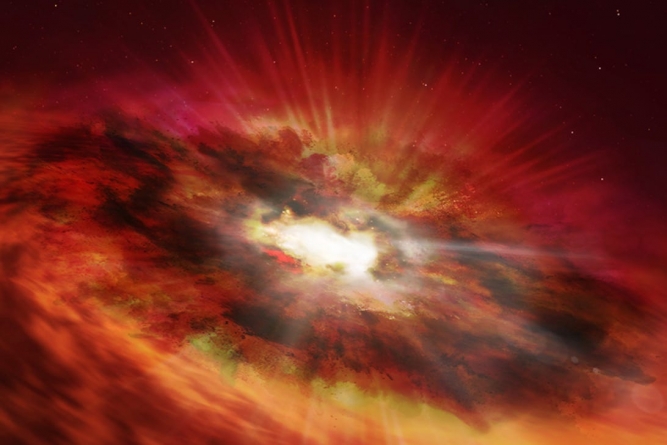 WASHINGTON: Some 13.8 billion years ago, the universe was born with a fierce Big Bang. For the following many millennia, however, it was more of an interstellar day care.

Our Milky Way galaxy was in its formative decades, baby stars were burping out their very first sparkles, and even black holes we now view as frightening giants were wispy eyelets just getting used to their strength, probably knocking over all the asteroid legos.

And to scientists’ surprise, NASA’s Hubble Space Telescope unknowingly caught one such toddler void in its tracks, according to a paper published Wednesday in the journal Nature.

Its birthday is about 750 million years post-Big Bang, and it’s nicknamed GNz7q. Adorable.

For years, this rapidly growing, soon-to-be-supermassive black hole had been hidden in old Hubble data despite living in one of the best-studied areas of the sky, one that’s covered by the Great Observatories Origins Deep Survey-North. Then, one day, GNz7q appeared as a mysterious red dot amid space’s dark background.

The black hole can be seen as a bright red dot on the Hubble GOODS-North field sky survey.

“GNz7q is a unique discovery that was found just at the center of a famous, well-studied sky field,” Gabriel Brammer, an astronomer from the Niels Bohr Institute of the University of Copenhagen and co-author of the study, said in a statement. “It’s unlikely,” he added, “that discovering GNz7q within the relatively small GOODS-North survey area was just ‘dumb luck,’ but rather that the prevalence of such sources may in fact be significantly higher than previously thought.”

In other words, there may be a bunch more baby black holes that were accidentally overlooked and are waiting to be found. GNz7q might also help scientists achieve an even greater cosmic task: decoding the origin of supermassive black holes.

“Supermassive” barely begins to explain how absolutely gigantic black holes can get. These voids are millions of times the size of our sun. For context, a million Earths could fit within our host star. I don’t even want to think about how many could nestle into an enormous black hole.

Anyway, because of this, a longstanding question for astronomers is one you may be pondering right now: How do some black holes get so big? Where does it all start?

“Understanding how supermassive black holes form and grow in the early universe has become a major mystery,” Brammar said in a statement.

Brammar explains that scientists think supermassive black holes originate in the dusty cores of starburst galaxies, or galaxies that pop out stars super quickly. Then, while chomping on all the starburst dust and gas, the abyss presumably gains lots of heat and eventually emerges from its cocoon accompanied by a quasar, or luminous central jet.

Somewhere along the way, these black holes are thought to relentlessly grow in size and turn into the spectacles we observe.

However, even though scientists have found both starburst galaxies and dazzling quasars in the past to bolster the beginning and end of the theory, the story’s middle chapters are based on computer simulations. An intermediary between the starburst galaxy start and quasar finale hadn’t been observed before — until GNz7q, that is.

“GNz7q provides a direct connection between these two rare populations and provides a new avenue toward understanding the rapid growth of supermassive black holes in the early days of the universe,” Seiji Fujimoto, an astronomer at the Niels Bohr Institute of the University of Copenhagen and lead author of the paper, said in a statement.

In essence, though it lived during an era known as the Cosmic Dawn, GNz7q could finally explain how supermassive black holes that reside in later epochs of the universe came to be. NASA even calls the ancient chasm a potential “missing link” for the supermassive black hole origin theory, especially because it also exhibits a ton of similarities with both quasars and starburst galaxies.

“The object’s properties across the electromagnetic spectrum are in excellent agreement with predictions from theoretical simulations,” Fujimoto said. For instance, its redness on the GOODS-North survey is likely the product of quasar light that’s reddened due to starburst dust.

This author has not added a biography. Meanwhile Diaspora has contributed 1707 posts. Click here to view them.