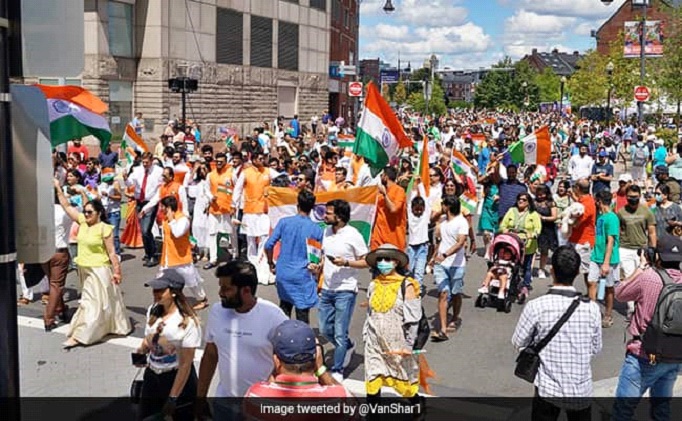 WASHINGTON : A 220-feet US-India flag flying high in the sky over Boston attracted everyone’s attention during the first-ever India Day Parade to mark the 75th anniversary of the country’s independence in the historic American city.
Marked by bands of veterans, scores of floats reflecting the diversity of both India and the United States, amidst a patriotic flavour and songs, the Indian Day Parade was attended by thousands of people from more than 30 countries.
Led by former Indian cricket player R P Singh, it was addressed by several politicians from Massachusetts and New England along with many eminent Indian-Americans from the region.
“The first ever India Day Parade in Boston was a historic success. All credit goes to the Indian-Americans in the city and the volunteers who worked day and night to make this a grand success,” said community leader Abhishek Singh, the president of the Federation of Indian Associations-New England which was the organiser of the parade.
Mr Singh, the brain behind the India Day Parade in Boston, said that he was inspired by Prime Minister Narendra Modi’s call for celebrating 75 years of Independent India as “The Azadi Ka Amrit Mahotsav” across the world.
“Boston is known for starting America’s freedom struggle. So, we decided to celebrate this in a grand manner in this historic city,” he said.
During the parade on Saturday that culminated at the Boston Harbor, an airplane carrying a 220-feet India-US Flag flew over the city.
“India’s tricolor flying high in the sky stole the heart of the public at large. It was not just an ordinary flag, it was a 220-feet long Indian tricolor flying along with an American star spangle being flown by a small airplane in the blue sky scattered with white and grey clouds,” Mr Singh said.