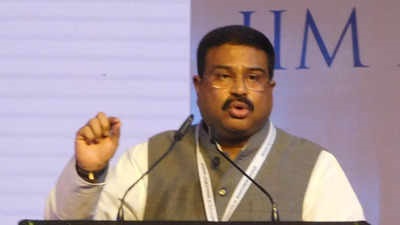 WASHINGTON : Union education minister Dharmendra Pradhan on Friday called upon US educational institutions to partner with India in rapidly transforming the education and skilling landscape. The minister also called for greater academic collaboration between higher education institutions in both the countries for offering twinning, joint degrees and dual degree programmes.

Pradhan made the comments at the India Ideas Summit organised by the US-India Business Council and the US Chamber of Commerce, International Affairs, south Asia. The theme of the event was “Maximising the Next 75 years of US – India Prosperity”.

“The new National Education Policy (NEP) lays emphasis on internationalisation of education. I called upon American institutions and companies to partner with India in rapidly transforming education and skilling landscape.

A growing digital economy, aspirational population, a knowledge-based society and policy reforms are creating unprecedented opportunities in India,” he said. “India and the US have similar societies and shared values. Education and skill development are important pillars of Indo-US relations,” said Pradhan.

He also called for strengthening collaboration in the areas of research and skill development between the two countries. “India is taking great efforts in skilling, re-skilling and up skilling its youth. India has a large, young population who are an asset to any industry globally if they are provided focussed training and capacity building as per industry requirement, he further added.