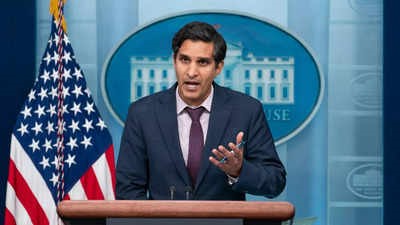 WASHINGTON: Given its long-standing ties with Russia, India may be coy about openly censuring Moscow for its invasion of Ukraine, but it turns out an Indian-American is front and center in lining up sanctions against Russia for its breach.
Daleep Singh, who is the deputy National Security Advisor at the National Security Council and deputy director of the National Economic Council in the White House, has been tasked with drawing up sanctions aimed at punishing Russia for its invasion.

Singh, who was born in Olney, Maryland and raised in Raleigh, North Carolina, is the great-grand nephew of Dalip Singh Saund, who was the first Asian American elected to Congress in 1956. He had earlier served in the Obama administration as deputy assistant secretary of the treasury for international affairs and acting assistant secretary of the treasury for financial markets, portfolios that have him a handle on sanctions as it relates to international finance.

At a White House briefing on Tuesday, Singh’s mastery of the subject was evident in his opening remarks when said that in previous sanctions regimes, it took weeks and months to mount a decisive response, but this time, “we announced our first tranche of sanctions in less than a day and in lockstep with Allies and partners in the European Union, the United Kingdom, Canada, Japan, and Australia.”

Calling the first tranche of President Biden’s financial sanctions “only the sharp edge of the pain we can inflict,” Singh warned that “no Russian financial institution is safe if the invasion proceeds” and he outlined what is expected to be graduated sanctions.

Among the steps Singh announced on Tuesday:

Singh said the US stands “ready to press a button” to take action on the two largest Russian financial institutions, which collectively hold almost $750 billion in assets – or more than half of the total in the Russian banking system.

In addition, he also announced sanctions against Russian oligarchs and the spiking of Russia’s Nord Stream 2 natural gas pipeline to Germany in coordination with Berlin.

“This was the beginning of an invasion, and this is the beginning of our response,” Singh said, warning that the actions US took today were only the first tranche, and if Putin escalates further, “we will escalate further using financial sanctions and export controls, which we’ve yet to unveil.”

A senior Russian diplomat in Sweden said last week Moscow does not give a shit about sanctions and it is used to it. Singh though promised it would be different and it would hurt.