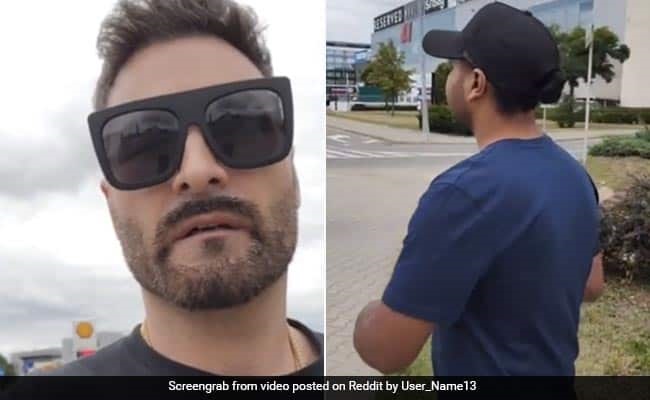 WARSAW : A video of an unhinged Caucasian man heckling an Indian in Poland has left the Internet seething. From calling the Indian a “parasite invader” to accusing him of “f****** up Europe”, the man continues his unprovoked tirade for four minutes in the video that has been widely shared on social media.

“Why are in you Poland? There’s too many of you in America,” the man says in the video, pointing his camera at the Indian.

The Indian man tells him not to film him and tries to avoid the heckler who keeps following and abusing him.

Unverified social media users identified the man as Jon Minadeo Jr, a neo-Nazi who heads a hate group called Goyim TV, which made headlines earlier this year for dropping flyers in California’s Bay Area, that blamed Jews for the COVID-19 pandemic.

His latest stunt drew strong criticism on Reddit where one user wrote, “An American douche in Poland, calls an Indian guy an invader, while standing outside a KFC. In English. You can’t make this level of stupidity up.”

“The guy being harassed is a saint for not knocking the crap out of this guy,” said another.

“A Nazi in Poland accusing others of invading on the anniversary of the WW2 invasion?” wrote another user.

Some users nominated him for the platform’s leaderboard for most “punchable” faces and noted that he was “a (failed) former actor and (even worse) rapper”.

The incident is the latest instance of hate against Indians abroad to make the headlines. In the past week, An Indian-American in California was called a “dirty Hindu disgusting dog” while in Texas a group of women were told to “go back” because they were “ruining” America.