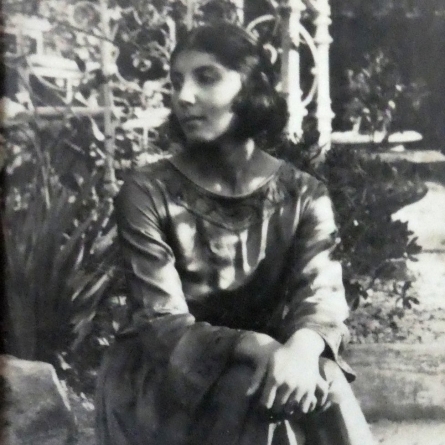 WALES: An Indian student won acclaim in Wales as a bard and became
the first woman to get a law degree from University College London. And
although racial prejudice brought a heartbreaking end to a three-year
relationship she never went home, writes Andrew Whitehead.

Dorothy Bonarjee was Indian by
birth, English by upbringing, French by marriage – and Welsh at heart.

To put it another way, she was the
perpetual outsider, sometimes by chance, and at other times by choice. Even the
moment of her greatest achievement in 1914 – winning one of Wales’s most
prestigious cultural prizes while still a teenager – is notable above all
because she was so obviously not Welsh.

In India, Dorothy Bonarjee and her
family stood apart, by class, culture and religion. They were upper-caste
Bengali brahmins, but Dorothy spent her childhood living a simple life on the
family estate hundreds of miles away from Bengal in Rampur, near India’s border
with Nepal. They were also Christians – her grandfather served as a Scottish
pastor in Calcutta (now Kolkata) after being converted by celebrated Scottish
missionary Alexander Duff.

Dorothy’s life changed utterly in
1904 when – along with her brothers, Bertie and Neil – she was sent to London
for her schooling. She was just 10 years old.

Dorothy’s parents – both of whom had
spent time in Britain – wanted their children to be, like them, part of the
“England returned” who were increasingly running India on behalf of
the imperial power.

Among the Indian elite, this British
experience had “something of the snob value of a peerage in Great
Britain,” one of the Bonarjee clan remarked.

A photograph survives of the three
young Bonarjees at about the time they arrived in London. Dorothy looks demure
in a white dress with a black ribbon in her hair. Bertie, her older brother, is
in a suit and tie. It’s a statement of how English they had become – even
though the world around would always see them as Indian.

Dorothy’s father was a barrister as
well as a landowner. She was probably closer to her mother, who was a strong
advocate of girls’ education. Both daughter and mother were active supporters
in Britain of votes for women. And thanks to her mother, Dorothy had a
privilege rare in either Britain or India a century ago – she was going to get
an education just as good as her brothers.

“At the time of the First World
War, there were about a thousand Indian students at British universities,”
says Dr Sumita Mukherjee at the University of Bristol, who has written a book
about “England returned” Indians. “Around 50 to 70 of these
would have been women.”

In 1912, Dorothy Bonarjee joined
this select group. The family had expected Dorothy to go to the University of
London. But according to family folklore, she found London too
“snobbish” and so opted instead for the University College of Wales
in the largely Welsh-speaking seaside town of Aberystwyth.

“Where the hell is that?!”
her father is said to have exclaimed. But Dorothy got her way. And her brother
Bertie also enrolled there – in part to serve as his sister’s chaperone.

Dorothy’s decision may well have
been shaped by the progressive reputation of the college. “A major
foundational principle for the establishment of the University College at
Aberystwyth was that all religious persuasions and cultural backgrounds were
welcome,” says Dr Susan Davies, an archivist and historian at what is now
Aberystwyth University.

And the college, the oldest of three
forming the University of Wales, also had an impressive record in gender
equality. By the time Dorothy arrived there, approaching half the students were
women, a much higher proportion than at most British universities at this time.
By the time of her graduation ceremony in 1916 – when many of the men were
fighting in Flanders and France – women were in a clear majority.

Dorothy was clearly a popular
student, taking a prominent role in the literary and debating society and
helping edit the college journal. Her big moment came in February 1914 at the
college’s annual Eisteddfod, a pageant and celebration of Welsh culture in
which writers and musicians competed for prizes. While this was not as
prestigious as the national Eisteddfod, it was a major cultural event in the
country’s Welsh-speaking heartlands.

Entrants for the main competition,
poetry in the traditional Welsh style, had a chance to win an imposing
hand-carved oak chair. All poems were submitted under pseudonyms. A Welsh
newspaper, the Cambria Daily Leader, reported on its front page under the
headline Hindu Lady Chaired the “remarkable” scenes when the winner
was announced:

The highest place was awarded to
‘Shita’, for an ode written in English, and described as an excellent and
highly dramatic treatment of the subject… Miss Bonarjee received a deafening
ovation when she stood up and revealed herself as ‘Shita’. She was led up to
the throne… The ‘chairing’ ceremony then proceeded amidst great enthusiasm.

Dorothy’s parents were present to
see their 19-year-old daughter’s success. Her father was prevailed upon to
address the crowd, thanking them for the way they had “received a
successful competitor of a different race and country”. If India had given
birth to a poet, he declared, Wales had educated her and given her an
opportunity to develop her poetic instincts.

Emboldened by her success, she
contributed poems to journals including The Welsh Outlook, a monthly magazine
reflecting and encouraging Welsh cultural nationalism. Even after she left
Wales, she continued to publish there.

“She loved the Welsh,”
says her niece Sheela Bonarjee. “She couldn’t speak Welsh – so she was always
an outsider in that sense. But they did accept her.”

However, Dorothy endured heartbreak
at Aberystwyth as well as acclaim. Sheela Bonarjee still has the battered black
exercise book in which her aunt collated her verse. Alongside one of the poems,
Dorothy jotted down a note: “Written at the age of 22 when a Welsh student
after 3 years of secret engagement dropped me because his parents said ‘She is
very beautiful and intelligent but she is Indian.'”

“It destroyed her. She was
distraught,” Sheela says, recalling the confidences her aunt shared about
that failed romance. “There’s a poem of hers that shows the loss of that
boyfriend.” That poem is called Renunciation:

So I must
give thee up – not with the glow

Of those who
losing much yet rather gain.

But losing
all. Did never martyr go

Along the
bleeding road of useless pain?

Did never
one held prisoner by a creed,

By those who
answered duty to his need,

With
faithless loathing feet to his fate come?

Dorothy had got used to being the
outsider but there could be a painful price to pay for being different.

Her younger brother, Neil, later
studied at Oxford – and came across a wall of prejudice there. “Indians in
general, it must be said, along with other coloured races were not popular in
the University,” he wrote. His English fellow students “had something
which I had not, namely an Empire. They possessed, while I only belonged.”

Dorothy was undaunted. From
Aberystwyth, she and Bertie returned to London where both took a second degree
course. Again, she was a trailblazer – the first woman student at University
College London to be awarded a law degree. The family then expected the
youngsters to return and make their lives and careers in India. Her brothers
dutifully got on the boat. Dorothy rebelled.

She was caught between different
cultures and social values. She was free-spirited and committed to women’s
equality – not someone who would easily consent to a marriage arranged by her
family in India. So she eloped with a French artist, Paul Surtel.

Her father was furious; her mother
seems to have been more understanding. The couple married in 1921, and settled
in the south of France. While Surtel gained distinction as a painter, his wife
largely retreated from public view. They had two children, one of whom died in
infancy, but by the mid-1930s the marriage was over. “Nothing is more
wearing morally,” Dorothy commented, “than a weak husband.”

Her family pleaded with her to
return to India. Once again she refused – a decision she seems later to have
regretted. Her father eventually bought her a small vineyard at Gonferon in
Provence to serve as both home and livelihood. Money was tight. This was not
the life of ease she might have hoped for. She never remarried.

Sheela Bonarjee followed in her
aunt’s footsteps from India to London in the 1950s, and made several visits to
the south of France. She remembers her “Auntie Dorf” as elegant,
confident and unconventional. In some ways she was very French, Sheela recalls.
“She had wine with every meal, which for me as an Indian was very strange
and at times I wondered why I was so sleepy all day.” But she spoke French
with a pronounced accent.

Dorothy Bonarjee kept in touch with
her Welsh friends all her life. In her old age, she paid a pilgrimage to her
old university. “I went with her to Aberystwyth – that must have been in
her 80s,” Sheela Bonarjee recalls of a trip more than 40 years ago.
“It was an important visit for her – to have her memories.”

She now has the distinction of a place in the Dictionary of
Welsh Biography,
the only person of Indian origin among almost 5,000 entries. It’s written by Dr
Beth Jenkins of the University of Essex. “Dorothy certainly embraced Welsh
national culture,” she argues, “and contributed significantly to it
during her time in Aberystwyth.”

Dorothy lived to almost 90. But she
never set foot in India again after leaving as a young girl. The Indian side of
her remained important, though. On high days and holidays she would delight her
French neighbours by dressing up in a sari. But she was in many ways more
French, more English, perhaps even more Welsh, than she was Indian. And
everywhere, she was always the outsider.

When a health emergency prompted
Nathan Romburgh and his sisters to look into their family history, decades
after the end of apartheid, they uncovered a closely guarded secret that made
them question their own identity.