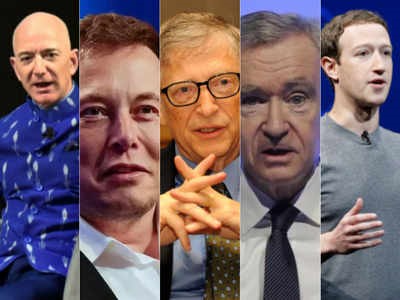 TORONTO:
Despite the Covid-19 pandemic and widespread layoffs across sectors, the
world’s richest people have collectively gained 23 per cent or $1.3 trillion
since the year began, the Bloomberg Billionaires Index showed.

Here
are some of the wealthiest people across the globe who beat the
pandemic-induced slowdown to become richer:

Amazon
boss Jeff Bezos is the richest man on the planet with a total net worth of $187
billion.
According to a November 2020 SEC filing, Bezos owns about 11 per cent of Amazon.
He held 16 per cent share of the world’s largest online retailer before a 4 per
cent stake was transferred to MacKenzie Bezos in 2019 following the couple’s
divorce.

Bezos’
net worth climbed $72.4 billion during the year, helped by the boost given to markets
by unprecedented stimulus efforts by governments and central bankers.
Amazon is one of the four companies whose valuations have crossed $1 trillion.
The others include Microsoft, Apple and Google.

Musk has added $167 billion to his
net worth this year, the most of anyone on the Bloomberg Billionaires Index.
Musk’s ranking improved from 35 in the beginning of the year to 2nd in 10
months.

His advance up the wealth ranks has been driven largely by Tesla, whose market
value crossed $500 billion. About three-quarters of his net worth consists of
Tesla shares, which are valued more than four times as much as his stake in
Space Exploration Technologies Corp, or SpaceX.

Microsoft Corp co-founder Bill Gates
slipped to the third position in the current year. This is the second time in
the history of the index that Gates is ranked lower than No. 2.

Bill Gates held the top spot for
years before being bumped by Jeff Bezos in 2017. At present, his total net
worth is $131 billion.

The French luxury tycoon Bernard
Arnault’s wealth plummeted during the initial pandemic days. However, demand
for some luxury goods has seen a rebound in recent months.

Consequently, Bernard holds the
fourth spot in the list with a net worth of $110 billion. The wealth accrues
from his business empire comprising more than 70 brands like Louis Vuitton and
Sephora.

Facebook
co-founder Mark Zuckerberg is the youngest centibillionaire (people whose
wealth exceeds $100 billion) in Bloomberg billionaires list. With a total net
worth of $105 billion, he holds the fifth position.

Two years ago, Jeff Bezos was the
only centibillionaire in the world but today there are five. In addition to
Bezos, they are Bill Gates, Mark Zuckerberg, Elon Musk and Bernard Arnault.

Chairman of Berkshire Hathway Warren
Buffett is the only person among the top 10 billionaires on Bloomberg’s index
whose wealth shrunk during the year.

Buffett’s net worth dropped by about
$4.09 billion. However, he still remains the sixth richest person in the world
with a total net worth of $85.2 billion.

The economic impact of the pandemic hit Berkshire’s wide range of investments
and the company had to sell its entire stake in four major US airlines. It held
10 per cent stakes in American Airlines, Delta, Southwest and United.

With
a total net worth of $81.4 billion, Google co-founder Larry Page secured the
seventh position in Bloomberg Billionaires index.

Page is a co-founder of Alphabet,
the holding company for Google, the world’s largest search-engine operator. He
stepped down as CEO of Alphabet Inc in December 2019 but continues to be a
board member and a controlling shareholder.

The
chairman and co-founder of software giant Oracle, Larry Ellison is the eighth
richest man in the world with a net worth of $79.7 billion.

He owns about a third of the Redwood
City, California-based company as well as a stake in Tesla, a sailing team, the
Indian Wells tennis event and real estate, including Hawaii’s Lanai island. His
database company Oracle has a revenue of over $40 billion in the year to May
31.

Former
CEO of Microsoft Steve Ballmer is the ninth richest man globally with a wealth
of $79.1 billion. He also owns the Los Angeles Clippers basketball team, which
he bought for $2 billion in 2014.

Ballmer was hired by Bill Gates as
an employee at Microsoft in the year 1980. He eventually became the company’s
president in 1998 and replaced Gates as CEO in 2000.

With a net worth of $78.8 billion,
Sergey Brin is the tenth richest man of 2020. He co-founded Alphabet, the
holding company that owns Google, with Larry page in 1998.

Brin stepped down as president of
Alphabet in December 2019 but continues to be a controller shareholder and
board member.