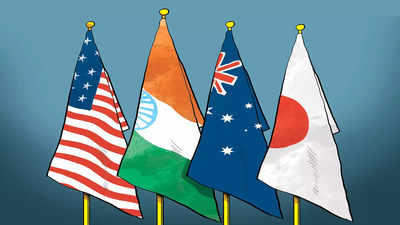 TOKYO: Ahead of PM Narendra Modi’s visit to Japan for the Quad summit starting Monday, India talked up the “positive and constructive” agenda of the grouping saying Quad was partnering, among other things, for infrastructure cooperation that avoids burdening other countries with unsustainable debts. The mention of unsustainable debts by foreign secretary Vinay Kwatra is seen as a dig at Beijing which believes Quad is aimed at containing China.

While Kwatra said the proposed US Indo-Pacific economic framework plan for the region is still under discussion, the foreign secretary hinted that India may join the initiative as he added that the economic dimension of the Quad cooperation is very important for harnessing economic opportunities in the region and that this will be one of the focus areas for Modi during his visit.

The government also reiterated its position on wheat saying the decision to regulate exports is also meant to protect vulnerable countries. Modi will have bilateral meetings with US President Joe Biden and also his Japanese and likely Australian counterparts, Fumio Kishida and Anthony Albanese respectively. Albanese is expected to take over from Scott Morrison who was ousted by the Labor Party in the elections on Saturday.

While the situation in Ukraine is again expected to be discussed in detail, Kwatra said reiterated foreign powers were appreciative of India’s position that sought cessation of hostilities and return to dialogue and diplomacy.

When asked specifically about how much of a factor China’s behaviour will be in the discussions, Kwatra said whenever Quad leaders meet they look to address both challenges and opportunities in the Indo-Pacific. “Bilateral relations are a separate issue but right now whatever issues related to the Indo-Pacific that are on agenda will be discussed,’’ he said.

On being asked if Quad could play a more security-oriented role because of Chinese aggression, Kwatra said Quad should be seen in the proper context and also keeping in mind its core values of democracy, pluralism and market economy. He said Quad seeks to promote and positive and constructive agenda that includes Covid response, climate action and cooperation on critical and emerging technologies, biotech, diversification of semiconductors supply chain and security of critical cyber infrastructure.

Modi will also hold a Business Roundtable with around 25-30 Japanese industry representatives and have a few one-on-one meetings with prominent Japanese business leaders. On the bilateral with Biden, who had asked India to not accelerate its oil imports from Russia in a virtual meeting last month, Kwatra said there is long-standing cooperation between the 2 countries in diverse areas ranging from trade, defence, security, climate and education is on an upward trajectory. “There is regular exchange of visits and dialogue not just on the bilateral agenda, but also on regional and global issues,” he said.