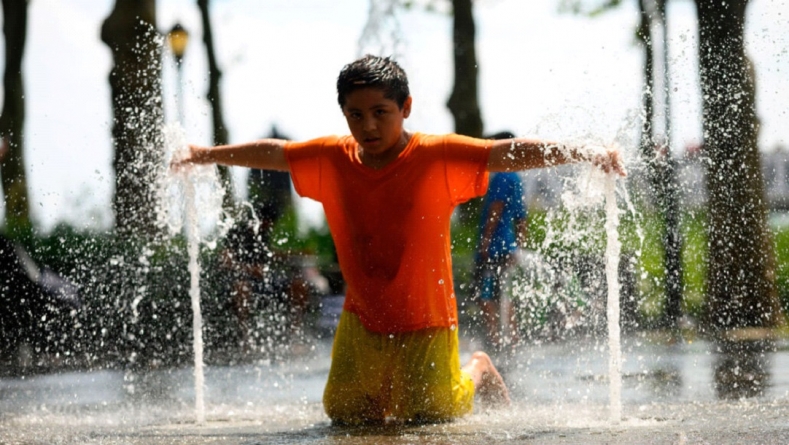 TOKYO : Heat waves were a hallmark of the summer of 2022. And they were brutal. From England to Japan, these heat waves shattered temperature records. After sundown, little cooling arrived. In the end, more than 2,000 people in Europe died from the extreme heat. Meanwhile, heat-parched forests in Portugal and Spain went up in flames as wildfires raged.
Extreme heat can lead to heat cramps, heat exhaustion and heat stroke (which often ends in death). When the body loses too much moisture, kidney and heart disease may develop. Extreme heat can even change how people behave. It can increase aggression, reduce our ability to get work done and impair teens’ ability to focus and learn.
Explainer: How heat kills
As climate change continues to crank up outdoor temperatures, scientists are working hard to understand how well humans can withstand extreme heat. And that research now suggests people can’t handle feverish temperatures nearly as well as once thought.
If true, millions more people could quickly find themselves living in environments too hot to survive.
Scientists have predicted that human-caused climate change would increase the occurrence of heat waves. And 2022 saw many such waves of extreme heat. They arrived early in southern Asia. Wardha, India saw a high of 45° Celsius (113° Fahrenheit) in March. That same month, Nawabshah, Pakistan saw temperatures soar to 49.5° C (121.1° F).
Analyze This: How hot will it get?
From Shanghai to Chengdu, July temps in China’s coastal megacities rose above 40° C (104° F). Japan saw its worst June heat wave since record-keeping began in 1875.
The United Kingdom shattered its hottest-ever record on July 19. Temperatures that day in the English village of Coningsby reached 40.3° C (104.5). That town is as far north as Calgary in Alberta, Canada, and the Siberian city of Irkutsk. Meanwhile, heat-fueled wildfires in France forced thousands to flee their homes.
And a series of U.S. heat waves in June and July gripped the Midwest, the South and the West. Temperatures soared to 42° C (107.6° F) in North Platte, Neb., and to 45.6° C (114.1° F) in Phoenix.
Globally, human exposure to extreme heat tripled between 1983 to 2016. This was especially true in South Asia.
“Over a period of time,” our bodies can adapt to warming climates, says Vivek Shandas. He works at Portland State University in Oregon as a climate-adaptation scientist. Over millennia, humans have weathered many climate shifts, he notes. “[But] we’re in a time when these shifts are happening much more quickly,” he adds — perhaps too quickly for people to reasonably adapt.
Hot zones
On July 13, 2022, heat waves seared much of Europe, Asia and North Africa, smashing temperature records. China’s Shanghai Xujiahui Observatory noted its highest-ever temp — 40.9° C (105.6) —in almost 150 years of record-keeping. Tunis, Tunisia, reached a 40-year record of 48° C (118.4° F)! 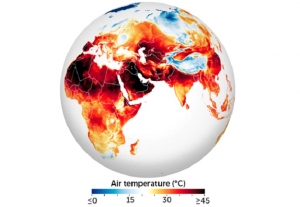 Staying cool
Our bodies’ have an ideal core temperature of about 37° C (98.6° F). To help stay there, our bodies have ways to shed excess heat. The heart pumps faster, for instance. That speeds the flow of blood, releasing heat to the skin. Air passing over the skin can then wick away some of that heat. Sweating also helps.
But there’s a limit to how much heat people can endure.
Temperatures can be expressed two ways: as dry-bulb and wet-bulb values. That first, dry-bulb number is the one that shows up on a thermometer. But how hot we feel depends on both that dry-bulb temperature and on how moist — humid — the air is. That humidity-adjusted number is the wet-bulb temperature. It accounts for our ability to sweat off some of the heat.
In 2010, scientists estimated the human body’s limit to be a “wet bulb” temperature of 35° C (95° F). There are different ways to reach that value. At 100 percent humidity, it will feel that hot when the air is 35° C. It could also feel that hot if the air is 46° C (114.8° F) but the humidity level is only 50 percent.
Why such a big difference? 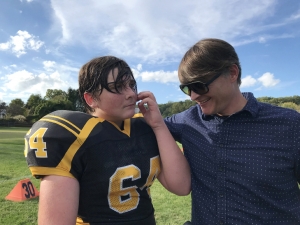 This young football player worked up a real sweat in the late-summer heat. In some regions, warming climates may make outdoor sports a bit riskier — especially where the humidity is high. Cyndi Monaghan/Moment/Getty Images Plus
At 100 percent humidity, there’s too much moisture in the air for us to sweat and release our internal heat. As the humidity falls, our ability to sweat away excess heat rises. So we can feel cooler than the thermometer might suggest. That’s also why scientists use wet-bulb values when discussing heat-stress risks in some climates, explains Daniel Vecellio. He’s a climate scientist at Pennsylvania State University in University Park.
“Both hot/dry and warm/humid environments can be equally dangerous,” he says. But where that danger level lies depends on how moist the air is. In dry areas where the outside temperature is much hotter than our skin’s temperature, the body will rely entirely on sweating to cool down, Vecellio explains. In humid areas, however, the body can’t sweat efficiently. So even where the air may be cooler than skin, it can seem hotter.
How hot is too hot?
“No one’s body runs at 100 percent efficiency,” Vecellio adds. Different body sizes have a role as do differences in age, how well we can sweat — even our adaptation to the local climate. So there isn’t a one-size-fits-all threshold temperature for heat stress.
Still, for the last decade, that 35° C wet-bulb number has been considered the point beyond which humans can no longer regulate their bodies’ temperature. Recent lab-based data by Vecellio and his team now suggests that a general, real-world temperature limit for heat stress actually is much lower — even for young and healthy adults.
This team tracked heat stress in two dozen people between the ages of 18 and 34. It studied them in a variety of controlled conditions in a chamber where humidity and temperatures could be varied. Sometimes scientists held the temperature constant and changed the humidity. Other times they did the opposite.

Each time, the volunteers exerted themselves just enough to model minimal outdoor activity. They might walk on a treadmill, for instance. Or they might pedal slowly on a bike with no resistance. Each of the test conditions lasted for 1.5 to two hours. Along the way, the researchers measured each person’s skin temperature. They also tracked each person’s core temperature using a small telemetry pill that the volunteers had swallowed.
In warm and humid conditions, these people could not tolerate wet-bulb temperatures close to 30° or 31° C (86° to 87.8° F), the team estimates. In dry conditions, that wet-bulb temperature limit was even lower — from 25° to 28° C (77° to 82.4° F). The researchers shared their findings in the February Journal of Applied Physiology.
On this basis, when it’s very dry — about 10 percent humidity — an air temperature of about 50° C (122° F) would correspond to a wet-bulb temperature of 25° C (77° F). Here, the air temperature is so high that sweating isn’t enough to cool off the body, the team’s findings show. In warm, humid conditions, wet-bulb and air temperatures are similar. But when it’s really humid, people could not cool off from sweating. And the air itself was too hot to help cool the body down.
These data, Vecellio says, suggest that how much heat people can endure under realistic conditions is complex. More importantly, the upper limit can potentially be far lower than once thought. The 2010 study’s theoretical finding of 35° C may still be “the upper limit,” he adds. With the newer data, he says, “We’re showing the floor.” 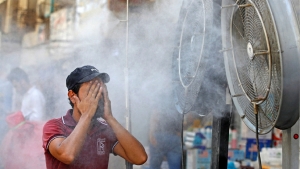 And those new data came from young, healthy adults doing minimal work. The limit on heat stress is expected to be lower still for people who exert themselves outdoors — or for the elderly or children. Vecellio and his team are now looking into limits for such at-risk people.
If our tolerance to heat stress is lower than scientists had realized, that could mean millions more people may face deadly heat far sooner than scientists had realized. As of 2020, there were few reports that wet-bulb temperatures around the world had yet reached 35° C. However, computer models of climate now project that within the next 30 years or so, such a threshold could be hit — or exceeded — regularly in parts of South Asia and the Middle East.
Some of the deadliest heat waves in the last two decades were at lower wet-bulb temperatures. A 2003 European heat wave caused an estimated 30,000 deaths. The 2010 Russian heat wave killed more than 55,000 people. In neither event did the wet-bulb temperatures exceed 28° C (82.4° F).
Protecting people
There’s an old song titled Too Darn Hot. But when Cole Porter wrote it in 1947, he never pictured the temperatures many people now encounter. How to help people understand the growing risks posed when it gets too darn hot is “the part that I find to be tricky,” says Shandas at Portland State. He wasn’t involved in Vecellio’s research. But Shandas did develop the scientific system behind a campaign to map urban heat islands across the United States.
Shandas says it’s very useful to have data on how people respond to heat that come from a precise study, such as the one Vecellio’s group carried out. This allows researchers to better understand how well people tolerate heat stress. But, Shandas adds, such data still don’t show how best to turn these findings into messages the public will understand and heed. People have many misconceptions about how vulnerable their bodies are to dangerous overheating.
One misconception: Many people think their bodies can quickly adapt to extreme heat. Data show that isn’t true. People in regions that aren’t used to extreme heat tend to die at higher rates — and even at lower temperatures — simply because they aren’t used to the heat. The 2021 heat wave in the Pacific Northwest was not just excessively hot. It also was super hot for that part of the world at that time of year. Such unexpected temperature extremes, Shandas says, make it more difficult for the body to adapt.
Heat that arrives unusually early and right on the heels of a cool period can also be more deadly, notes Larry Kalkstein. He’s a climate scientist at the University of Miami in Florida. “Often, early season heat waves in May and June,” he finds, “are more dangerous than those in August and September.”
Rising heat
Sixty years ago, the average season of heat waves in the United States lasted about 22 days in any given year. By the 2010s, the average heat-wave season had more than tripled, lasting almost 70 days. 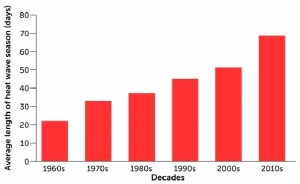 One way to improve how well communities cope with feverish temps may be to treat heat waves like other natural disasters. For instance, maybe they should get names and severity rankings the way tornadoes and hurricanes do. One new group is hoping to make headway, here. Formed two years ago, this international coalition of 30 partners calls itself the Extreme Heat Resilience Alliance. New rankings should form the basis of a new type of heat-wave warning that would focus on factors that aggravate human vulnerability to heat. Wet-bulb temps and acclimation are two such factors.
The rankings also consider such things as cloud cover, wind and how hot the overnight temperatures are. “If it’s relatively cool overnight,” says Kalkstein, who created the system, the health impact won’t be as bad. Unfortunately, part of the global trend in warming has been an increase in overnight temps. In the United States, for example, nights are now about 0.8 degrees C warmer than they were during the first half of the 20th century.
This new system is currently being tested in four U.S. metro areas: Miami-Dade County in Florida; Los Angeles, Calif.; Milwaukee-Madison in Wisconsin; and Kansas City. It’s also being tried in Athens, Greece, and Seville, Spain. With 2022 smashing record temperatures around the globe, these warnings may come not a moment too soon.