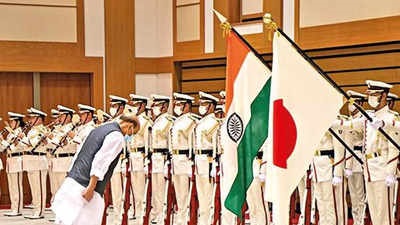 Defence minister Rajnath Singh and his counterpart Yasukazu Hamada, who also met separately in addition to the 2+2 dialogue, stressed the importance of the India-Japan defence partnership and the critical role it will play in ensuring a free, open and rules-based Indo-Pacific region. “We also held extensive discussions on ways to enhance maritime cooperation, including MDA (maritime domain awareness),” Singh said.

While India is grappling with the continuing military confrontation in eastern Ladakh with China, though troop disengagement has taken place in a few areas, Japan is strengthening its military capabilities to prepare for any contingency arising out of the Taiwan Strait crisis.

The India-Japan joint statement, incidentally, took note of Tokyo’s resolve to examine all options necessary for its national defence, including “counter-strike” capabilities. “The Japanese side expressed its determination to fundamentally reinforce its defence capabilities within the next five years and secure substantial increase of defence budget needed to effect it,” the statement said.

“Acknowledging Japan’s determination to reinforce its defence capabilities, the Indian side expressed its support to work towards enhanced security and defence cooperation,” it added.

The two countries will make “continuous efforts towards more complex and sophisticated” bilateral exercises. Towards this end, the two defence ministers agreed “the early conduct of the inaugural fighter exercise” will pave the way for “much greater cooperation and interoperability” between their air forces.

Japan has become a regular participant in the high-voltage India-US ‘Malabar’ naval combat exercise since 2015, which now also includes Australia, with all the four ‘Quad’ countries being wary of China’s aggressive muscle-flexing in the Indo-Pacific. India and Japan already regularly conduct the ‘Dharma Guardian’ exercise between their armies and the ‘JIMEX’ between their navies.

India and Japan also operationalised their Reciprocal Provision of Supply and Services Agreement during the multi-nation ‘Milan’ naval exercise hosted by India off Visakhapatnam in March this year to strengthen their strategic partnership. Apart from Japan, India has such reciprocal military logistics pact with the US, Australia, France, South Korea and Singapore, all with an eye firmly on China.

Singh also emphasised the need to expand the scope of partnership with Japan in the field of defence equipment and technological cooperation. The two countries decided to identify “concrete areas” in defence technologies in addition to ongoing cooperation in the areas of unmanned ground vehicles and robotics.

Singh also invited Japanese industries to invest in India’s two defence corridors in UP and Tamil Nadu, where he said “a conducive environment for the growth of the defence industry” has been created by the Indian government.