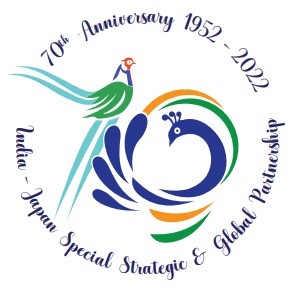 The Ministry of External Affairs (MEA) had launched a logo design contest in September 2021 to design the Indian logo. Entries were invited from the public through the MyGov portal. This was publicized by External Publicity Division of MEA and also by Embassy of India in Tokyo. A total of 1131 entries were received. A Screening Committee assessed these entries based on contest parameters and chose a logo as the first prize winning entry. The winning logo design is placed below. The logo depicts a Peacock and a Green Pheasant, which are national birds of India and Japan respectively. The Green Pheasant forms the numeral 7 with its tail and the Peacock forms the numeral 0. The logo symbolizes the bond of friendship between the two countries. It has been created by Mr. Anup Deo Purty. Mr. Purty has studied Master of Computer Application (MCA) at Sardar Patel University, Gujarat. He has wide experience in e-learning, UI and website design.

To mark the 70th anniversary, a number of events are planned to be held in India and Japan throughout the year. These include cultural activities, exhibitions and seminars, covering diverse areas of India-Japan bilateral relations. These events will mark the occasion in a manner that truly reflects its significance and the commitment of all stakeholders to realize the full potential of the India-Japan Special Strategic and Global Partnership.