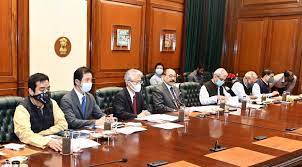 TOKYO: India and Japan held the sixth joint meeting of the India-Japan Act East Forum (AEF) on 15 March 2022 in New Delhi. The meeting was co-chaired by Foreign Secretary and Ambassador of Japan to India H.E. Mr. Suzuki Satoshi. It was attended by representatives of relevant Ministries and State Governments of the North Eastern Region of India.  In addition, officials of the Japan International Cooperation Agency (JICA) and the Japan Foundation (JF) participated.