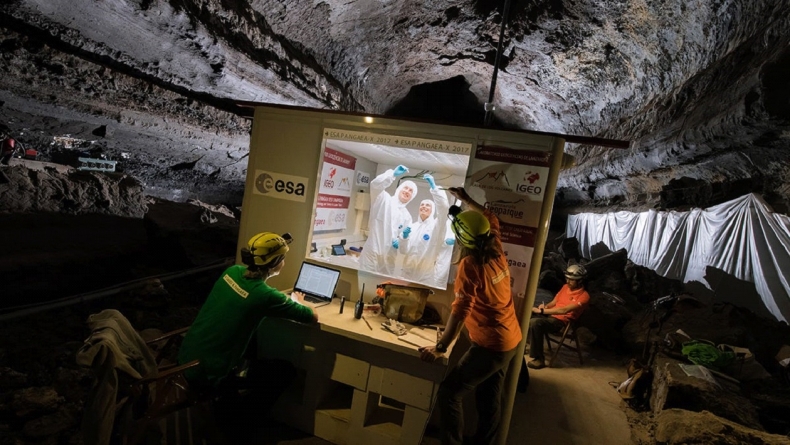 TEXAS : Considering the menagerie of critters living in cozy caves across Earth, it was only a matter of time before scientists extended their hunt for alien life to such cavities furnishing the rest of our solar system.
Carved into the arid sands of Mars and etched into sticky lunar soil, there are thousands of otherworldly dugouts waiting to be explored by humanity. These damp and protected places are theoretically perfect to have once hosted extraterrestrial beings.
Well, maybe.
But optimistically looking to a future where we start checking out some of those possible alien hotspots, teams of international researchers presented two papers this week, published in the Journal of Geophysical Research-Planets, offering a fascinating outline for how scientists ought to go about studying non-Earth caves one day.
“This is an untapped area of inquiry in planetary science, and its importance in the search for life should not be overlooked,” Jut Wynne, a researcher from Northern Arizona University and lead author of both studies, said in a statement. “In our lifetime, it is quite possible that we will peer into underground Mars to address the age-old question, ‘Does life exist beyond Earth?'”
In one paper, 31 scientists, engineers and astronauts worked with 82 space and cave experts to produce a list of 198 questions we must consider while looking at Martian or lunar caves. And they point out the 53 most important ones. Perusing the list, you’ll find concerns ranging from what instruments one would need to probe an extraplanetary cave to how similar those caves would be to Earth’s own caves – all the way to things like, if we do find aliens in there, how would we deal with that? What happens next?
And in another paper, a crew of planetary scientists offer the first detailed catalog of where all the known caves in our solar system are found.

Bodies for which possible cave entrances have been identified, with the number of features per body in parentheses. Locations for possible cave entrances on the moon and Mars are there too.
AGU and Journal of Geophysical Research-Planets.
“We now have what I hope will become two foundational papers that will help propel planetary cave research from what was once an armchair contemplative exercise to robots probing planetary subsurfaces,” Wynne said.
With some financial investment and institutional support, Wynne said, human research and technology could reach the levels needed to traverse extraterrestrial caves within the next decade.
According to a press release regarding the studies, scientists have already identified at least 3,545 potential icy, rocky and mysterious caves on 11 moons and planets in our solar system – not just on Mars and our own lunar friend but on the moons of Saturn and Jupiter, too. Some caves have even been identified on comets and asteroids flinging through our humble corner of the cosmos.
In other words, if we do end up advancing our machines to the degree Wynne hopes, we have quite a few targets queued up.
“Caves on many planetary surfaces represent one of the best environments to search for evidence of extinct or perhaps extant lifeforms,” Wynne said. “For example, as Martian caves are sheltered from deadly surface radiation and violent windstorms, they are more likely to exhibit a more constant temperature regime compared to the surface, and some may even contain water ice.”
In a similar vein, a longstanding debate among Mars-focused scientists is whether there’s a hidden lake of liquid water beneath the red planet’s surface. An area like that, tucked away from the toxic Martian environment, would intuitively be the most likely place for proof of alien life to exist, in the event aliens once lived there.

The left-hand panel shows the surface topography of Mars’ south pole, with the outline of the south polar cap in black. The light blue line shows an area studied by researchers to see whether there’s a hidden lake around here. The green square shows the region containing the inferred subglacial water. The right-hand panel shows the surface undulation – visible as the red area – identified by a research team. The black outline shows a potential area of water as inferred by the orbiting radar.
University of Cambridge
And there’s another angle to these caves that Wynne and fellow researchers are interested in bringing to light too.
“Radiation shielding will be essential for human exploration of the Moon and Mars,” Leroy Chiao, a retired astronaut, former commander of the International Space Station and co-author of the first paper, said in a statement. “One possible solution is to utilize caves for this purpose. The requirements for astronaut habitats, EVA suits and equipment should take cave exploration and development into consideration, for protection from both solar and galactic cosmic radiation.”
Later Artemis missions intend to build base camps and rocket checkpoints that could benefit from lunar caves if we know enough about the structures. In fact, NASA’s trusty Lunar Reconnaissance Orbiter spacecraft already identified a sort of 330-foot deep pit on the moon that researchers described as “more hospitable compared to anywhere else on the moon.” UCLA called it “always sweater weather.” And, I mean, doesn’t that sound divine?