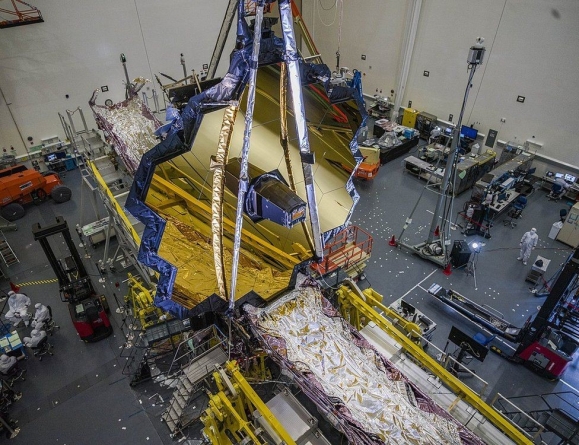 TEXAS: A $10bn glittering space jewel recedes into the distance.

This is the moment the James Webb telescope came off the top of its rocket to begin its mission to image the first stars to shine in the cosmos.

The video was transmitted in near real-time last Saturday, but the feed to Earth was very glitchy and broken up.

The European Space Agency (Esa) has since had the sequence cleaned up and set to music by the UK artist Charlotte Hatherley.

It’s the last view we’ll ever get of the telescope scientists believe will go on to make transformative discoveries about the early Universe, and about planets circling far-off stars.

Webb is currently heading to an observing position some 1.5 million km from Earth on its nightside. It should arrive at this location in late January.

Already the astronomical facility is beyond the orbit of the Moon.

Saturday’s launch on an Ariane rocket from French Guiana was a spectacular affair – and a very precise one.

The European booster performed flawlessly, putting Webb at just the right altitude and inclination to the equator, and with the required velocity.

Indeed, the flight performance was so good, mission controllers now believe the telescope’s lifetime has been significantly extended because it didn’t have to use so much of its own fuel when making a later course refinement.

Another indicator of the Ariane dividend is the speed at which Webb’s solar array is seen to deploy in the video. It comes out just 70 seconds after the telescope’s ejection from the rocket’s upper-stage.

The event was not expected for several minutes but Webb’s onboard computers determined that all conditions for a safe deployment had been met and commanded the array’s immediate release.

The telescope was launched in a folded configuration – a tightly packed cuboid a little under 10.7m by 4.5m by 4.5m. It’s now being directed to unfold itself, with the tricky unfurling of a giant sunshield scheduled to take place over the next few days.

Arianespace, which manages the launches from French Guiana’s Kourou spaceport, will be putting the Réaltra technology on Europe’s next-generation Ariane vehicle – the Ariane-6 – when it enters service next year.