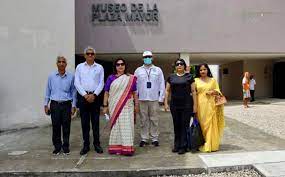 SANTIAGO: Minister of State for External Affairs and Culture of India, Smt. Meenakashi Lekhi, MOS(ML) visited Panama, Honduras and Chile from 28 April – 05 May 2022.

During her visit to Panama from 28 April – 01 May 2022, MOS (ML) met H.E. Ms. Erika Mouynes, Minister of Foreign Affairs of Panama and held bilateral discussions during which H. E. Ms. Janaina Tewaney, Minister of Government of Panama was also present. Both sides agreed to enhance cooperation in trade and investment, health and pharma, Ayush, IT, space and culture. An agreement on Gainful Employment for dependents of officials of diplomatic mission/post was signed between India and Panama. The two sides also agreed to explore greater cooperation through India-SICA framework and in the multilateral fora.

At a meeting with Minister of Culture, H.E. Ms. Giselle Gonzalez Villarue, MOS(ML) signed an Agreement on Cultural Exchange Programme for 2021-24. MOS(ML) also visited the Panama Canal along with Minister for Canal Administration, Mr. Aristides Royo. She also visited Colon Free Trade Zone, the largest FTZ in Americas and was briefed on the FTZ and possible areas for cooperation with India. She met with Panama based Indian entrepreneurs and visited their showrooms in the FTZ.

MOS(ML) led the curtain raiser for International Day of Yoga 2022 at the iconic Cinta Costera. Minister of Culture of Panama and two Vice Ministers also participated at the event. MOS visited a Hindu temple, participated in a traditional Garba and planted an Ashoka tree. She also attended a cultural program organised in the framework of AKAM celebrations showcasing both traditional Panamanian and Indian dances. She interacted with members of the Indian community, the largest in Latin America numbering 15,000.

During her visit to Honduras from 01-03 May 2022, MOS (ML) called on the President of Honduras, H.E. Ms. Iris Xiomara Castro Sarmiento. She also met Acting Minister of Foreign Affairs and International Cooperation of Honduras, H.E. Mr. Antonio Garcia and discussed various bilateral, regional and international issues. MOS (ML) along with Minister of Agriculture H.E. Ms. Laura Suazo, laid the foundation stone for the US $ 26.5 million Jamastran Valley Irrigation project, funded by Government of India through a Line of Credit. The project is estimated to irrigate 3,060 hectares of land and benefit about 1200 farmers.

As a part of Azadi Ka Amrit Mahotsav, MOS (ML) addressed more than 300 students, faculties and academicians at the largest private University of Honduras (UNITEC) on “75 years of India’s growth story”. She also interacted with the Rectors and Vice Rectors from 21 Universities in the country to explore cooperation possibilities under India’s New Education Policy 2020. MOS (ML) also attended a curtain raiser event for IDY 2022 at the National University of Honduras, participated in the tree plantation drive & visited the Centre of Excellence in Education in Information Technology (CEEIT), set up by India in 2008 where more than 26,000 students have been trained so far. The Centre was upgraded in 2016 with Indian assistance. MOS( ML) also interacted with the small but vibrant Indian community in San Pedro de Sula.

In Chile, MOS (ML) met Chilean Foreign Minister H.E. Ms. Antonia Urrejola Noguera with whom she had detailed discussions on bilateral relations. Both sides agreed to speed up their respective internal processes to facilitate early conclusion of bilateral agreements for cooperation in pharma, space, renewable energy and for empowerment of persons with disabilities. They also agreed to work closely in the Pacific Alliance and the multilateral fora, given their common values and principles.

During her meeting with Chilean Minister for Culture, Arts and Heritage, H. E. Ms. Julieta Brodsky Hernandez, the two sides agreed to cooperate in organising cultural events including screening of films in each other’s countries. MOS (ML) met with Speaker of Chilean Chamber of Deputies, H.E. Mr. Raul Soto and the President of India- Chile parliamentary friendship group, H.E. Ms Ciccardini. MOS also had a glimpse of a session of the Chilean Parliament.

MOS met with Chilean Federation of Industries (SOFOFA) and discussed the growing bilateral cooperation in trade & investments, opportunities for Chilean companies & advantages of doing business with India. She also interacted with the Indian community in Chile and inaugurated a Khadi and Ayurveda exhibition and planted a tree as part of India @75 AKAM celebrations. She also participated at a curtain raiser event for IDY 2022 in Chile.

The visit to Panama, Honduras and Chile provided fresh momentum to India’s relations with these countries in central and South America.