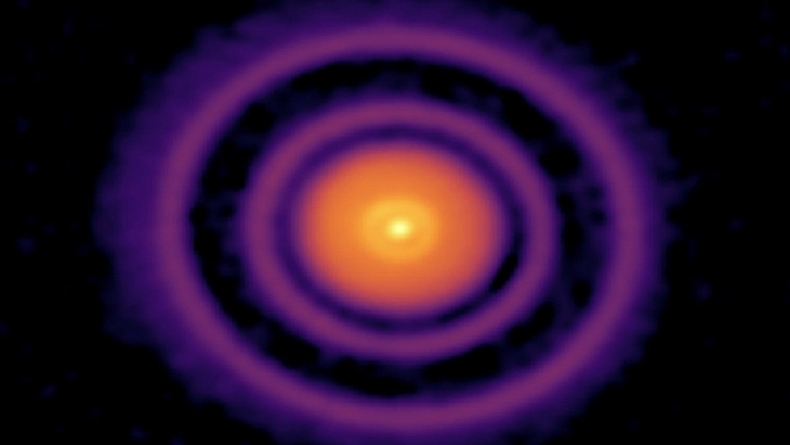 SANTIAGO : Astronomers said Tuesday that the world’s largest radio telescope, the Atacama Large Millimeter/submillimeter Array in Chile, might’ve picked up a signal from the youngest exoplanet discovered to date.
It’s a nascent world thought to have a Jupiter-like mass and to orbit the adolescent star AS 209, a supposed 1.6-million-year-old ball of gas that floats roughly 395 light-years from Earth in the constellation Ophiuchus. Translating from Greek to “serpent-bearer,” this regal title was given to the cosmic dot-to-dot because of the constellation’s resemblance to a man grasping a snake.
However, as the discovery team notes in its study on the find published in The Astrophysical Journal Letters, we aren’t yet 100% sure that this baby exoplanet really exists. And even if it does, we don’t quite know that it’s the youngest of its kind. There’s some margin for error on that front, so further investigation is required — an endeavor made difficult because the exoplanet candidate also appears shrouded in a halo of gas and dust.
Fascinatingly, that “circumplanetary disk” is the main reason scientists believe an exoplanet is sitting near AS 209. These rings are hypothesized to give rise to moons and help develop infant planets as they flourish into strong bodies — though in truth, the Chilean array of 66 high-altitude antennas might’ve merely detected random blobs of matter rather than a full-on orb inside the disk.
But you know what we now have to clear some of this up? Something that can delve into the distant, difficult-to-study universe and pierce through veils of thick gas and dust? Yep, NASA’s James Webb Space Telescope infrared superhero strikes again. 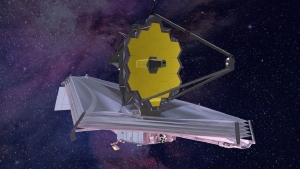 NASA
In the near future, the study team intends to call on the JWST’s infrared parsing ability to, first of all, confirm whether AS 209 really is 1.6 million years old. Then, the ‘scope might be able to discern whether a planet is legitimately present inside the dusty halo — if it is, the JWST could potentially use infrared spectroscopy to give us a really clear picture of what it’d be like to stand on it.
Unlike regular images, spectral datasets offer information about chemical composition, atmospheric cloud content and other such qualities that can’t be captured with an aesthetic snapshot.
“The best way to study planet formation is to observe planets while they’re forming. We are living in a very exciting time when this happens thanks to powerful telescopes, such as ALMA and JWST,” Jaehan Bae, a professor of astronomy at the University of Florida and lead author of the paper, said in a press release.

Science images from the research show (right) bloblike emissions of light coming from otherwise empty gaps in the highly structured, seven-ring disk around AS 209 (left). This indicates possible presence of an exoplanet.
If Bae and fellow scientists are correct that there’s a super young (old?) exoplanet hovering around AS 209, it could be a huge development for the field of astronomy and add to the exciting ledger of JWST revelations.
That’s because, beyond its extraordinary youth, this candidate exoplanet seems to be an anomaly among the 5,000 or so identified thus far. Its signal to ALMA is rooted more than 18.59 billion miles away from its host star, which the team says challenges currently accepted theories of planet formation. For context, Earth is only about 93 million miles from the sun.
Further, it’s fortuitous that this potential world is enveloped in a circumplanetary disk, and notably one that has gas present within.
It wasn’t until 2019 that ALMA scientists made the first-ever detection of this phenomenon, while observing another young exoplanet, called PDS 70c. According to a paper published last year, that halo was probably constructing a moon for the beige gas giant. But since then, experts haven’t found many more. 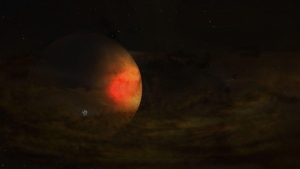 “Fundamental properties of CPDs, such as their sizes and whether they are indeed rotationally supported ‘disks’ or instead pressure-supported envelopes are not fully understood,” the study authors write.
But having that knowledge could help us extrapolate ancient dynamics of planets in our solar system, including Earth, as well as teach us how moons like our own glowing companion once formed long, long ago. Decoding the interplay between this disk and exoplanets could shed light on how and why planetary atmospheres and general environments form.
For now, hopes are high about the potential burgeoning world tucked into the serpent-bearer’s grip. The study authors optimistically write that the most likely explanation for ALMA’s results so far is that we’re witnessing a planet and its CPD embedded in the region around AS 209.