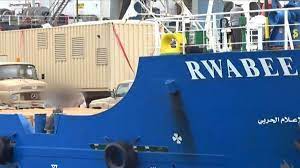 SANAA: Government of India is happy that the seven Indian sailors who were on the ship Rwabee and under the detention of the Houthis in Yemen since 02 January 2022 have been released. They reached Muscat last week and are expected to travel back to India shortly.

Government of India would like to thank all concerned parties for the release of the Indian sailors, in particular the Government of Oman.