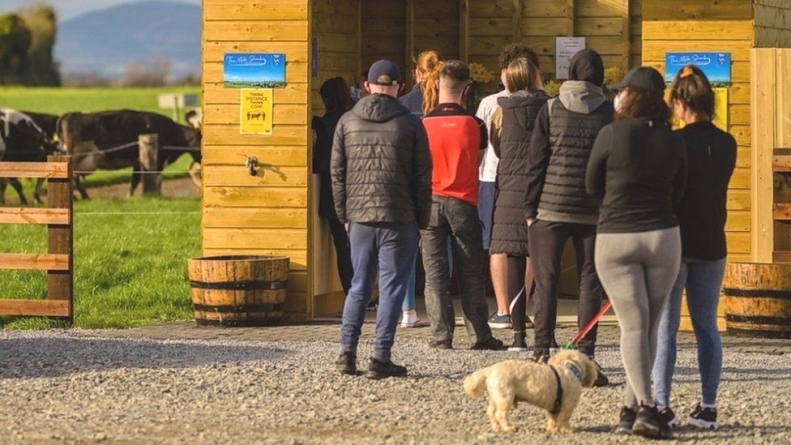 ROME: “It was something new,
something different,” says Tomás Smyth, without whom Ireland would not
have received its first milk vending machine.

The
adventurous can select from twelve different flavours, from chocolate to banana
and salted caramel.

The
vending machine opened for business amid a lockdown, at the end of March.

“For
two months it was crazy, 80 to 90 people in a queue here every day,” says
Mr Smyth, a dairy farmer in Ireland’s County Louth who has 180 cows with his
two brothers.

He says
his customers like a local product, with fewer transport miles and which is
never more than a day old.

“We
have a lot of different farmers across the country, coming to chat and see our
set-up,” he says. Dairy farmers in Offaly, Meath, and Donegal have now
visited and followed suit.

Mr Smyth
joins a growing body of small business owners who are giving new life to the
old business of vending machines, amid Covid and challenges to traditional High
Street retailing.

In the
UK, of the 24,500 employees servicing these machines, some 5,000 were made
redundant. But innovative and niche machines, often boasting upmarket,
healthier and specialist products, tell a different story.

David
Llewellyn, chief executive of the Vending and Automated Retail Association, says
automated micro markets saw 367% growth last year. These are small convenience
stores, without staff and where customers pay using a smartphone app or at an
unattended till.

Meanwhile
sales of healthy snacks (less than 5% fat and 0.2 grams of salt) grew by 147%
from vending machine in the last year, he says.

And the
vending options are always expanding. For example, you can now purchase fake
eyelashes from a machine (at Lash Loft in Newcastle) and perfume (from Russia’s
Perfumatic) and even collect your prescriptions.

Enrico
Donà sells prescription vending machines at Pharmaself24 in Vicenza, Italy. He
says that matching a prepared prescription with the customer is a
straightforward job which a machine can do quite easily.

He argues
the machine gives pharmacists more time to dedicate to customers who need more
help.

Pharmacists
see the machine, which takes three to four hours to install, as “an extra
employee”.

For
patients, instead of waiting in queues and worrying about opening hours,
“you get there, you enter a pin code and you collect. There it is,
easy,” Mr Donà says.

In April,
Rome got its first automated pizza vending machine – on the Via Catania near La
Sapienza university district.

The red
contraption cooks and dispenses pizzas in three minutes, ranging from
margherita to diavola, for between €4.50-6 (£3.80-5.10).

Italy has
one vending machine for every 145 people, lagging only Germany for vending
machines’ popularity in Europe.

Both
countries though trail Japan, with one machine for every 25 people. “They
have no vandalism,” notes Mr Llewellyn ruefully.

One big
change has been the way vending machines accept payment, says Mr Llewellyn.
Today in Britain 47% of machines offer cashless payment, double the proportion
of a year ago.

And
vending machines are increasingly smart devices, which communicate with central
management systems.

So before
route operators leave a depot, they know what has to go into every machine.

Until
recently, it was a question of “it’s Tuesday, so we go here,” Mr
Llewellyn says.

Some
products are more suited to vending for others. For something like perfume,
which can be distributed in a concentrated form and then reconstituted in the
machine, you can save many travel miles and packaging, points out Manish Shah,
chief executive of UK unattended retail company Aeguana.

Andrea
Goswell, commercial director at vending machine manufacturer Westomatic, points
out that many of us carry around reusable water bottles.

Dispensing
drinks into those cuts down on plastic waste, she says.

Its
“Hydration Station” lets you refill your own bottle with
triple-filtered chilled juices, and is operated by hovering over a button – you
don’t even need to press.

The
industry’s biggest challenge has been changing the refrigerating gas away from
R134-a, previously the most common refrigerant. R-134a is a significant
greenhouse gas – one gram has the same warming potential in the atmosphere as
1,410 grams of carbon dioxide.

Vending
machine makers have been moving to use carbon dioxide instead. Ironically it is
a greener refrigerant, though it operates at pressures five times higher than
the gas in the older systems. “That conversion has been quite hard
work,” says Ms Goswell.

The
pandemic and race to sustainability are changing the vending machines we see
everywhere, argues Mr Donà.

“There
are a number of challenges, and the solutions are not so easy to find. But our
technology can bring benefits and change what we’re doing in a much better
way.”