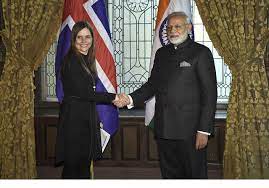 REYKJAVIK: Prime Minister Shri Narendra Modi had a bilateral meeting with H.E. Ms. Katrin Jakobsdottir, Prime Minister of Iceland, in Copenhagen on the sidelines of the 2nd India-Nordic Summit on 4th May.

Both Prime Ministers warmly recalled their first meeting during the 1st India-Nordic Summit in Stockholm in April 2018. They noted that this year both countries are celebrating the 50th anniversary of establishment of diplomatic relations.

Both leaders discussed ways to further strengthen economic cooperation especially in the sectors of geothermal energy, Blue Economy, Arctic, renewable energy, fisheries, food processing, education including digital universities, and culture. Geothermal energy, in particular, is an area where Iceland has special expertise, and both sides stessed on collaboration between universities of both countries in this sector.

Prime Minister lauded Prime Minister Jakobsdottir’s personal efforts at promoting gender equality and briefed her on India’s advances in this regard.