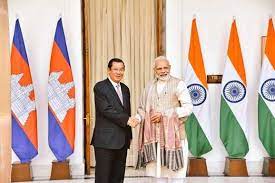 The two leaders held discussions on the entire range of bilateral issues, including cooperation in the fields of trade and investment, human resource development, defence and security, development cooperation, connectivity, post-pandemic economic recovery and people-to-people ties. They expressed satisfaction at the pace of bilateral cooperation.

PM Hun Sen emphasised the importance that Cambodia attaches to its relations with India. Prime Minister Modi reciprocated the sentiment and stressed Cambodia’s valued role in India’s Act East policy. The leaders reviewed the robust development partnership between both countries, including capacity building programmes and Quick Impact Projects under the Mekong-Ganga Cooperation framework.

The two leaders complimented each other on the 70th anniversary of the establishment of diplomatic relations between India and Cambodia being celebrated this year.

As part of these celebrations, Prime Minister Modi invited His Majesty the King of Cambodia and Her Majesty Queen Mother to visit India at a mutually convenient time.

Prime Minister Modi congratulated Cambodia on assuming the Chairmanship of ASEAN and assured India’s full support and assistance to Cambodia for the success of its Chairmanship.