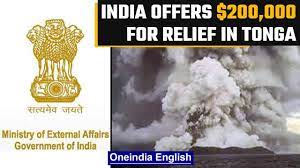 NUKU ALOFA: On 15 January 2022, a tsunami hit the Kingdom of Tonga impacting large sections of the country’s population and causing significant infrastructural damage.

India extends deep sympathy to the Government and the people of the Kingdom of Tonga for the damage and destruction caused by this unprecedented disaster.

As a close friend and partner under the Forum for India-Pacific Islands Cooperation (FIPIC) and as a gesture of solidarity with the friendly people of Tonga, Government of India extends an immediate relief assistance of US$ 200,000 to support relief, rehabilitation and reconstruction efforts in the Kingdom of Tonga.

India has firmly stood by Tonga during times of crisis and devastation caused by natural disasters, as during Cyclone Gita in 2018. Disaster Risk Reduction and Management is an important pillar of India’s Indo-Pacific Oceans’ Initiative (IPOI) announced by Prime Minister Narendra Modi in November 2019.