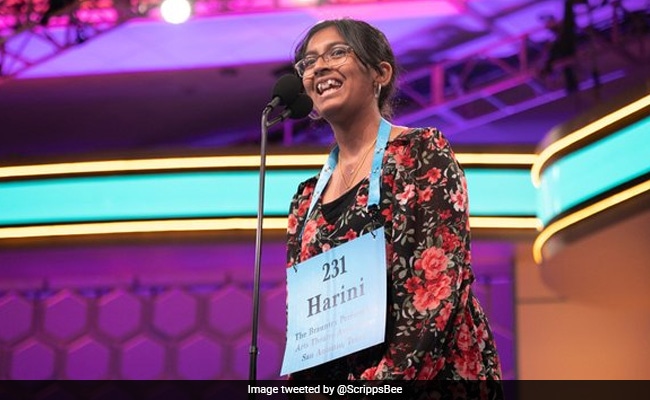 NEW YORK: A video of an Indian-origin girl spelling out incredibly difficult words in a rapid-fire round at the 2022 Scripps National Spelling Bee contest in the US has left social media users in a bind. Harini Logan got 21 words correct in the 90-second intense round.

Mr Raju studies in Class 7 in Denver, while Ms Logan is a student of Class 8 from Texas. The contest went to the spell-off after they were locked in a stalemate.

A video of Ms Logan spelling the words with utmost confidence and ease has widely circulated on social media. The clip, on Twitter, has recorded more than 329k views.

Some of the words Ms Logan spelt were: sereh, a fragrant grass of southern Asia; charadriiform, relating to an order of birds; and ditalini, short elbow-shaped pieces of macaroni. But the word that led to her triumph was: moorhen, a medium-sized bird defined as “the female of the red grouse.”

A number of people have reacted with awe to Ms Logan’s answers.

Most of the users said that they have never heard any of the words that were part of the round.

“That was anxiety-inducing. Love it,” said a third user.

It was Ms Logan’s fourth and final appearance in the Bee. She described her victory as “surreal”.