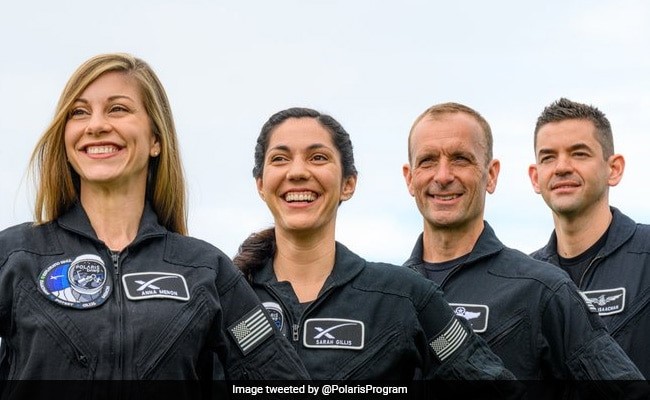 NEW YORK: SpaceX engineer Anna Menon will be among the crew of a unique space mission announced by US billionaire Jared Isaacman, who last year led the world’s first all-private space crew into orbit.

Anna Menon, the wife of Indian-origin physician Anil Menon, is a Lead Space Operations Engineer at SpaceX, where she manages the development of crew operations and serves in mission control as both a Mission Director and crew communicator, SpaceX release said on Monday.

Isaacman, the founder and CEO of American payment processing company Shift4, who had commanded the Inspiration4 mission, announced the Polaris Programme, “a first-of-its-kind effort to rapidly advance human spaceflight capabilities while continuing to raise funds and awareness for important causes here on Earth.”

The programme will consist of up to three human spaceflight missions that will demonstrate new technologies, conduct extensive research, and ultimately culminate in the first flight of SpaceX’s Starship with humans on board.

The first mission is named Polaris Dawn, which is targeted to launch no earlier than the fourth quarter of 2022 from NASA’s Kennedy Space Center in Florida.

The Polaris Dawn mission has many first-time objectives, so the Polaris Programme chose a crew of experts who know each other well and have a foundation of trust they can build upon as they undergo the challenges of this mission. Menon is a Mission Specialist and Medical Officer.

During her tenure at SpaceX, Anna Menon has led the implementation of Dragon’s crew capabilities, helped create the crew communicator operator role, and developed critical operational responses to vehicle emergencies, such as a fire or cabin depressurisation. Anna served in mission control during multiple cargo and crew Dragon missions, including Demo-2, Crew-1, CRS-22, and CRS-23. Prior to SpaceX, she worked for seven years at NASA as a biomedical flight controller for the International Space Station.

She is a Lieutenant Colonel at the US Air Force, who was selected by NASA in December last year along with nine others to be astronauts for future missions.

In addition to pursuing her lifelong passion for space, Anna enjoys hiking, flying small airplanes, and salsa dancing, and her greatest love is her family, including husband Anil, son James, and daughter Grace.

Anil Menon, 45, was born and raised in Minneapolis, Minnesota, to Ukrainian and Indian immigrants.

He was SpaceX’s first flight surgeon, helping to launch the company’s first humans to space during NASA’s SpaceX Demo-2 mission and building a medical organisation to support the human system during future missions. He previously served NASA as the crew flight surgeon for various expeditions taking astronauts to the International Space Station.

SpaceX said the Dragon mission will take advantage of Falcon 9 and Dragon’s maximum performance, flying higher than any Dragon mission to date and endeavouring to reach the highest Earth orbit ever flown.

“Dragon and the Polaris Dawn crew will spend up to five days in orbit, during which the crew will attempt the first-ever commercial spacewalk, conduct scientific research designed to advance both human health on Earth and our understanding of human health during future long-duration spaceflights, and be the first crew to test Starlink laser-based communications in space, providing valuable data for future space communications systems necessary for missions to the Moon, Mars, and beyond,” the company said.