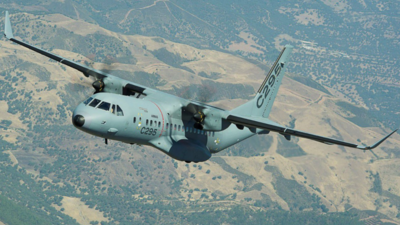 NEW YORK: A consortium led by Tata group and Airbus will manufacture 40 C-295 transport aircraft in Gujarat, the Centre announced on Thursday. Prime Minister Narendra Modi will lay the foundation stone of the facility in Vadodara on October 30.
“For the first time, the Airbus C-295 aircraft will be manufactured outside of Europe. This is very significant for the domestic aerospace sector,” defence secretary Ajay Kumar said, adding: “The total cost of the project is Rs 21,935 crore.”

The facility will eventually cater to export of the aircraft as well as for additional orders by the Indian Air Force.

Here’s all you need to know about the deal and the aircraft:

The first IAF squadron of C-295 transport aircraft will also be based in Vadodara.

The aircraft is expected to strengthen the logistic capabilities of the IAF and can be used for civilian purposes too.

“The project offers a unique opportunity for the Indian private sector to enter into technology intensive and highly competitive aviation industry. It will augment domestic aviation manufacturing resulting in reduced import dependence and expected increase in exports,” Kumar said.