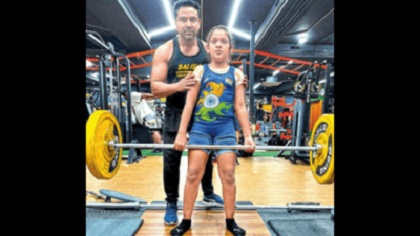 Kanak’s performance at the tourney at Motera in May this year enabled her selection for the World Powerlifting Championship 2022-23 in Orlando, Florida, in the US. The championship in America will be held from October 30 to November 5 and Kanak’s event is scheduled on November 2.
Powerlifting, a non-Olympic event, is a strength sport comprising squat, bench press and deadlift. Indersingh had hogged the limelight in December 2021 by powering his way to a gold medal in the 75kg category. His left quadriceps had torn off in the middle of the competition. But what stunned him was his daughter’s powerlifting capabilities.

“My wife and I had gone to officiate at the Gujarat state powerlifting championship at Motera. When our daughter saw a female athlete older than her but of the same height lifting weights, she told us she wanted to give it a try,” Indersingh told TOI in a telephonic conversation. “I was surprised because she had never practised or trained to lift weights. And to our surprise and shock, she lifted 102.5kg.”

“Generally, we don’t allow children below 12 years to start gym training,” Indersingh said. “They are told to run and do minimal exercise to keep themselves fit. But Kanak comes along with me to the gym and practises lifting.”

Indersingh doesn’t allow her daughter to do heavy lifting. “I make her do a little strength training and cardio,” he said.

When asked how she manages to balance studies and training, he said, “The school she attends has been extremely supportive of her training. Her teachers know that she is going to compete in the World Powerlifting Championship event in Florida.”