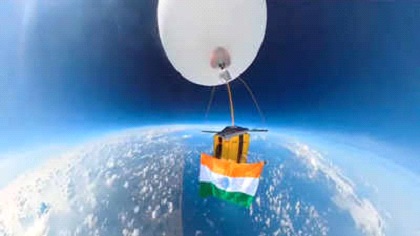 NEW DELHI : On the country’s 76th Independence Day, the tricolour was not only unfurled across the country and the world, but also in space on Monday. The tricolour was sent to the edge of space on a balloon by Space Kidz India, an Indian aerospace organisation that launches satellites made by high school and college students.

Also, Indian-American Nasa astronaut Raja Chari shared a photo of the Indian flag at the International Space Station (ISS).
Uploading a video of the tricolour unfurling at an altitude of 30km from Earth’s surface, Space Kidz India tweeted: “Celebrating 75 years of Independence by unfurling the Indian Flag @ 30 km in near space. This is a mark of respect and tribute to all the freedom fighters and pride to people who are struggling hard to make India proud every day.”

Space Kidz India had recently launched a satellite “AzaadiSat”. The satellite was developed by 750 girl students from government schools from across the country to mark 75 years of India’s Independence. Unfortunately, the satellite was wrongly placed in an unstable orbit by Isro’s newly developed mini-rocket SSLV-D1 and is not usable anymore. 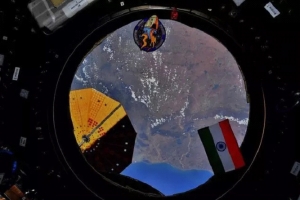 Astronaut Raja Chari, who had spent nearly six months at the ISS, shared a photo of the tricolour placed at the space station and tweeted, “On Indian Independence eve I’m reminded of Indian diaspora that I could see from @Space_Station where my immigrant father’s home town of Hyderabad shines bright. @nasa is just 1 place Indian Americans make a difference every day. Looking forward to @IndianEmbassyUS celebration.” 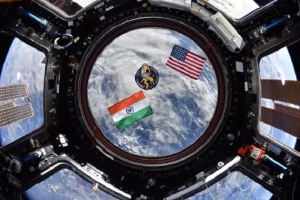 Raja Chari was among the four astronauts who splashed down in the Gulf of Mexico onboard a SpaceX aircraft earlier this year after spending almost half a year at ISS.

Meanwhile, PM Narendra Modi, during his I-Day speech, lauded India’s space capabilities and its space missions. “Whether we talk about entering space or going to great depth in the ocean through our space missions or (proposed) deep ocean mission, India is really going ahead in technology,” he said.