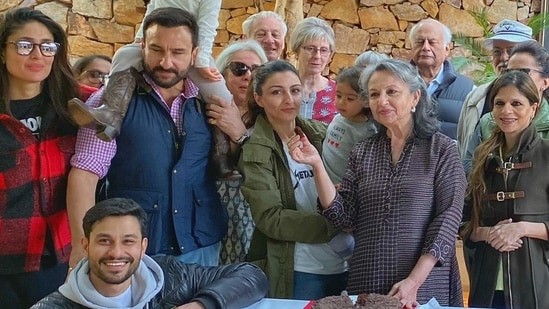 MUMBAI: Soha Ali Khan has reacted on the possibility of starring with her family members in a film or show. Her family includes Sharmila Tagore, Saif Ali Khan, Kareena Kapoor, Kunal Kemmu and Sara Ali Khan.

Actor Soha Ali Khan has responded to a question on featuring in a film alongside her family members including her mother Sharmila Tagore, brother Saif Ali Khan, sister-in-law Kareena Kapoor, husband Kunal Kemmu and niece Sara Ali Khan. In a new interview, Soha spoke about being a part of a film or show alongside the other actors.

Soha Ali Khan has so far featured with Kunal Kemmu in a few films including 99 and Dhoondte Reh Jaaoge in 2009. Kunal also had a cameo in her film Mr Joe B Carvalho (2014). In Go Goa Gone (2014), Soha had a cameo in the film which featured Saif Ali Khan and Kunal. Sharmila Tagore and Soha starred together in Life Goes On (2009).

In an interview with PeepingMoon, Soha said, “We are a whole bunch of people and I don’t think anyone can accommodate all of us. It is not possible (for any filmmaker) to do so. It will be nice if we are at the same dinner table. That would be a lot of fun.”

Soha also spoke about her 4-year-old daughter Inaaya and her choice of profession as an adult. She said, “Someday, she wants to be a unicorn and sometimes a dog. Those are what her dreams are right now. I want to give her dreams wings. My job as a parent is to equip her for the world and open out opportunities for her to be whatever she wants to be. I don’t want her to think acting is the only profession given that 85% of her family does it. She might want to do something else. I want her to have options and expose her to enough such that she can choose. This is what true empowerment is.”

The series is produced by Applause Entertainment in association with Emmay Entertainment and directed by Gauravv Chawla and Ananya Banerjee.