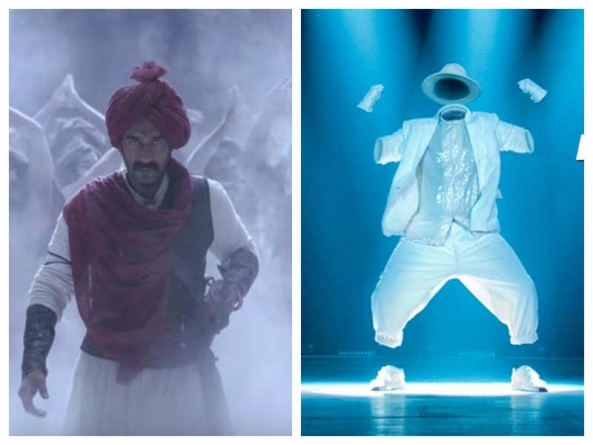 MUMBAI: Although the year 2020 barely had theatrical releases owing
to the pandemic and countrywide lockdown, we sure had a fair share of great
songs. From original songs like,
‘Ghamand Kar’ from ‘Tanhaji: The Unsung Warrior’
to the reprised version of ‘Muqabla’ from ‘Street
Dancer 3D’, these songs helped to keep calm and grooving throughout
the lockdown.

As we get ready to bid adieu to
2020, here are the top five songs that set the speakers blasting this year.
‘Ghamand Kar’ (‘Tanhaji: The Unsung Warrior’)

The year 2020 kick-started on a
roaring note with the release of Om Raut’s ‘Tanhaji: The Unsung Warrior’
starring Ajay Devgn, Kajol, and Saif Ali Khan in the lead roles. While the film
did record-breaking business at the box-office, its song ‘Ghamand Kar’ topped
the music charts for months ahead.
From the thumping beats matching the grandeur of the film to defining the war
cry of the sena, the song simply exhilarating. Composed and crooned by Sachet
Tandon and Parampara Thakur, the song has lyrics by Anil Verma.

The third instalment of Remo
D’Souza’s ‘ABCD’ is high on dance as expected. However, the film also had some
chartbuster songs like, ‘Lagdi Lahore Di’, ‘Garmi’, ‘Illegal Weapon’ and
others. However, the one that took everyone’s breath away was the remake of AR
Rahman’s classic ‘Muqabla’ song.
After ‘Humma Humma’ in ‘OK Janu’, Tanishk Bagchi recreated Rahman’s ‘Muqabla’
for ‘Street Dancer 3D’. The song also featured Prabhudheva apart from Varun
Dhawan and Shraddha Kapoor. The song has been sung by Yash Narvekar and
Parampara Thakur.

Disha Patani and Aditya Roy Kapur won the hearts
of millions of their fans with their sizzling chemistry in Mohit Suri’s
‘Malang’. Apart from their chemistry and brilliant performances from actors
like Anil Kapoor and Kunal Kemmu, the title track of the movie gained quite
some popularity.
The peppy track is sung by Asees Kaur and the song has music by Ved Sharma. The
song has Disha Patani showing off some stunning moves.

Imtiaz Ali brought together then
rumoured to be dating couple Kartik Aaryan and Sara Ali Khan in ‘Love Aaj Kal’.
Their crackling chemistry in the film was much appreciated by the audience and
the critics alike. While the song had some good songs, ‘Haan Main Galat’ gained
quite some popularity.
The song is composed by Pritam and has been crooned by Arijit Singh and
Shashwat Singh. The lyrics of the song have been written by Irshad Kamil.

Saif Ali Khan made us all groove to
the revamped version of his popular 90s song ‘Ole Ole’ in Nitin Kakkar’s
‘Jawaani Jaaneman’. The film also starred Tabu and Alaya F in lead roles.
The song has been sung by Amit Mishra and has music by Tanishk Bagchi. The
lyrics have been penned by Shabbir Ahmed. Meanwhile, the original Ole Ole was
sung by Abhijeet with Sameer as the lyricist.