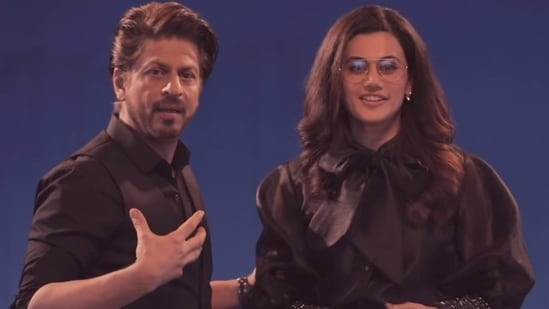 MUMBAI: Taapsee Pannu has finally bagged a film opposite Shah Rukh Khan. Not only this, the movie titled Dunki will be directed by none other than Rajkumar Hirani. Hours after Shah Rukh himself made the announcement with a video, Taapsee talked about working with him and Rajkumar Hirani with references from their films

Post the announcement, Taapsee took to Twitter to express her thoughts. She wrote, “Yes it’s hard to make it till here, and it’s harder when you are all by yourself but then a superstar once said ‘agar kisi cheez ko shiddat se chaho to puri kayanat tumhe usse milane me lag jati hai (if you wish for something with all your heart, the entire universe conspires to get it for you)’ cheers to honesty, hard work and perseverance. Almost 10 saal lage (it took 10 years) but finally ‘All is Well’.”

While the line by a “supestar” in Taapsee’s tweet is from Shah Rukh Khan’s film Om Shanti Om, All is Well is a popular line from Rajkumar Hirani’s blockbuster, 3 Idiots.

Several of Taapsee’s fans reacted to her on Twitter. Abhishek Bachchan reacted to her tweet, saying, “Congratulations Pannu ji.” Casting director-turned-filmmaker Mukesh Chhabra also dropped a heart emoticon in reaction to the tweet.

A fan shared a gif image of Shah Rukh and Taapsee and wrote, “So happy for you girl. Been wishing you to be cast opposite him since seeing you two in Badla promotion days, look so good together. And you are an amazing actor, you earned it. Seeing this tweet I like you even more. Congratulations on dream coming true and all the best.” Another shared a scene from Chak De! India featuring Shah Rukh and Shilpa Shukla. It was captioned, “Other actress to Hirani” followed by Shilpa’s line, “Aisa kya hai usme jo mujh mein nahi hai? (what does she have that I don’t)?”