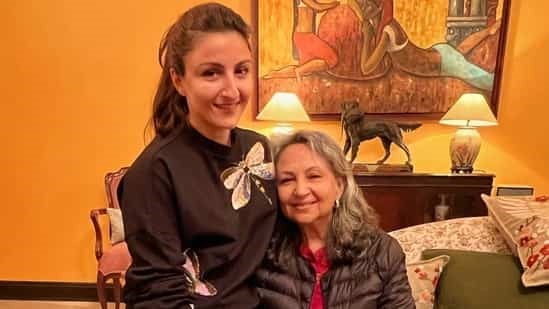 MUMBAI: Soha Ali Khan has recalled her experience of working with her mother, veteran actor Sharmila Tagore and called it ‘terrifying’. In a new interview, Soha has said that Sharmila’s ‘standards are very high’. She also revealed Sharmila’s advice to her during Rang De Basanti.

Sharmila Tagore and Soha Ali Khan featured together in the 2009 film Life Goes On. In the film, Sharmila essayed the role of Manju and Soha played Dia, the former’s daughter. The film won an award each at the Pravasi International Film Festival in Delhi, and at the London Asian Film Festival.

In an interview with Indian Express, Soha said, “I have worked with my mother in a film called Life Goes On, which was terrifying. To do one advertisement with her, I feel very scared. Her standards are very high. Everything from costumes to design to matching shoes, she does it all in two weeks in advance. And when it comes to me, my clothes inevitably have some dal stain or something and I am least bothered.”

Recalling when she sought her mother’s advice, Soha said, “My mother…told me that there is only one director and that there is no point for her to tell me anything. I remember, during Rang De Basanti, I had asked her how would she attempt the character I played. And she said, ‘You have to listen to only one person – the director, Rakeysh Omprakash Mehra. You must follow his lead’. That is also useful because if you keep taking several inputs, you can get confused.”

Meanwhile, Soha will be seen next in her debut web series Kaun Banegi Shikharwati, streaming on ZEE5. It also stars Naseeruddin Shah as a king in search of his heir–one among his four daughters, played by Soha, Lara Dutta, Kritika Kamra and Anya Singh.