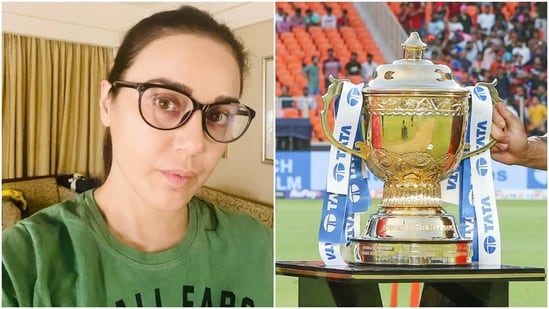 MUMBAI: Preity Zinta, co-owner of IPL team Punjab Kings, is one of the many who are amazed at the worth of Indian Premier League, the media rights of which were sold on Monday. She praised the league for employing thousands and being completely made in India. The league’s Indian sub-continent TV rights went for a whopping ₹23,575 crore while the digital rights were won with a bid of ₹20,500 crore at the media rights e-auction. The IPL has not revealed the names of the bid winners so far.

Sharing her anticipation ahead of the big reveal, Preity shared a picture of herself along with a note on Instagram. “Waiting to hear the BCCI announce the new IPL media rights. What an incredible sports property IPL has become! Employing thousands and entertaining billions across the globe, it’s dwarfing all other sports leagues by its incredible growth and it’s completely Made In India. Aur kya chahiye (what more is needed) #ipl #iplmediarights #tiing.”

The BCCI is set to laugh its way to the bank after selling its IPL TV and digital rights for the Indian sub-continent for a combined amount of ₹44,075 crore (around $6 billion), making it one of the richest entities in the sporting world. As of now, the amount the board has earned is already two and half times more than the 2018 auction value of ₹16,347 crore. The television rights were sold for ₹57.5 crore (per match) and digital for ₹50 crore (per match).

Preity currently lives in the US with husband Gene Goodenough and kids Jai and Gia. During the last IPL, Preity shared a few pictures of how she watched cricket matches on television, in the company of her children. She then flew to India for a few matches.

The actor recently flew down to India and attended Karan Johar’s birthday bash with husband Gene. She was spotted in a shimmery green dress.