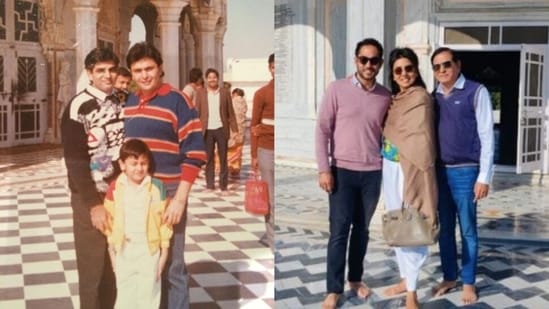 MUMBAI: Actor Neetu Kapoor took a trip down memory lane and shared a throwback picture of late husband-actor Rishi Kapoor and son-actor Ranbir Kapoor. Taking to Instagram, Neetu shared their family photo, which was clicked inside a temple. Neetu also posted her picture as she visited the same temple ‘after 30 years’.

In the first photo, Rishi Kapoor wore a red and blue sweater and paired it with blue denims. A young Ranbir stood in front of him wearing a white T-shirt, matching pants and a yellow jacket. Standing next to his friend, Rishi smiled while Ranbir Kapoor made a face.

In the next picture, a recent one, Neetu went to the same temple with the friend and his son. She wore a white and blue outfit and wrapped a grey shawl around her. Neetu also sported dark sunglasses as she posed inside the Padampura Jain temple in Jaipur.

Sharing the pictures, Neetu captioned the post, “After 30 years visited the same temple with @raj_bansal this time with his son (two hearts emoji).” Reacting to the photo, a fan wrote, “How Rishi sir directly or indirectly gets involved or has a reference in most of the things you do.

The universe never fails to bring you both closer even in form of memories, people or places.” Another person commented, “Ranbir is looking so cute.”One more comment read, “Rishi sir adorable as always much love.”

Rishi died on April 30, 2020, in Mumbai after battling Leukaemia for two years. Prior to his death, he was in New York for his treatment with Neetu. The couple got married on January 22, 1980, and share two children–Riddhima Kapoor Sahni and Ranbir.

Neetu was recently seen in JugJugg Jeeyo, her first project which she shot for after her husband’s death. Apart from Neetu, the film also stars Anil Kapoor, Varun Dhawan and Kiara Advani.

She will be seen in director Milind Dhaimade’s Letters to Mr Khanna. Apart from Neetu, the upcoming family entertainer film also stars Sunny Kaushal and Shraddha Srinath in the lead role. The film is touted as a “coming-of-age story” that will capture the beautiful and relatable relationship between a mother and her son. It is being made under Lionsgate India Studios.