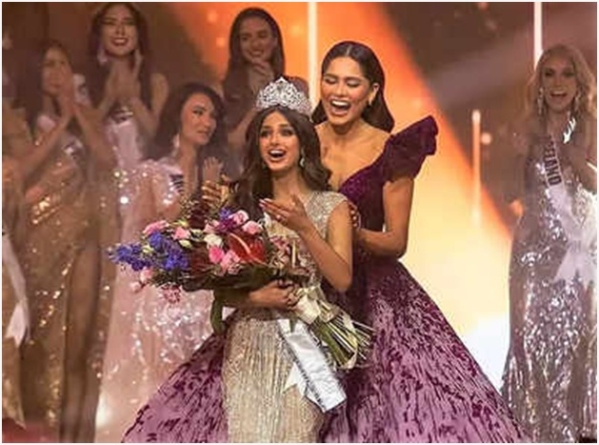 MUMBAI: Harnaaz Sandhu received the crown from last year’s winner, Andrea Meza, who took the stage, towards the end of the evening, to announce her successor. The other two top honours went to Miss Paraguay 2021 Nadia Ferreira, who was declared first runner-up, followed by Miss Universe South Africa 2021 LalelaMswane, who was adjudged second runner-up.

The fun-loving girl from the beautiful city of Chandigarh won every heart at the international pageant. She has studied her master’s degree in public administration, and loves acting, dancing, swimming, and horse riding. The versatile, compassionate, and confident girl, Harnaaz, is now all set to leave behind a remarkable legacy that would inspire thousands of individuals.

The announcement of the new winner was made on Miss Universe’s official social media account. Sharing the victorious moment, the handle posted, “The new Miss Universe is…India!.”

Expressing the feeling after her victorious moment, Harnaaz said, “Namaste, Universe! Thank you to each one of you for supporting me. Always believing in me and making me feel worth it. Now, this is the time to save the universe; let’s do this together.”

After 21 years India brought it’s crown back home. Kudos to the queen on her grand victory! You have made INDIA proud!