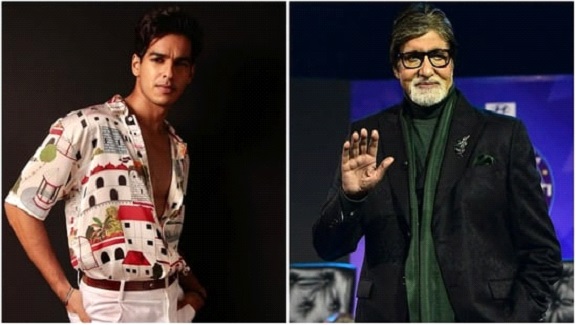 MUMBAI : As Amitabh Bachchan celebrated his 80th birthday on Tuesday, several members from different generations of the entertainment industry shared sweet stories about the veteran actor to wish him. Ishaan Khatter also recalled that Amitabh had a huge impact on his life, something he was not even aware of for a long time.
Ishaan Khatter shared that when he was a child, Amitabh Bachchan ensured that he gets into a good school. Amitabh was working with Ishaan’s mother – actor Neliima Azeem at the time and offered to help after he found out she was facing issues in getting Ishaan enrolled in a school.
Ishaan said “Not many people know this, but he’s done a huge favour to me, even before I became an actor. He was the reason why I got admission to my school. My mother was working with him at the time. It was very difficult to get an admission into that school and Mr Bachchan paid a personal visit to the authorities and the principal. I only found out about this much later in life, once I was an adult. But can you imagine that? The Amitabh Bachchan did that so that a kid could get a good education.”
Further praising Amitabh, Ishaan said, “Bachchan saab has been an icon for longer than my entire life. I have admired his work in films like Anand, Deewaar and so many more. In the last two decades that I’ve been watching his work, he has constantly reinvented himself not just as a star but as an actor. I have only respect and admiration for him. There’s so much to learn just by watching him.”
Ishaan had also shared a birthday wish for Amitabh Bachchan on his Instagram account. Sharing a picture of the actor from his film Deewar (1975), Ishaan wrote, Happy birthday Amitji.. from a child you once helped get admission into school. I only learnt this once I was older, little did I know that you would be part of my education forever… As a student of life and of cinema.”