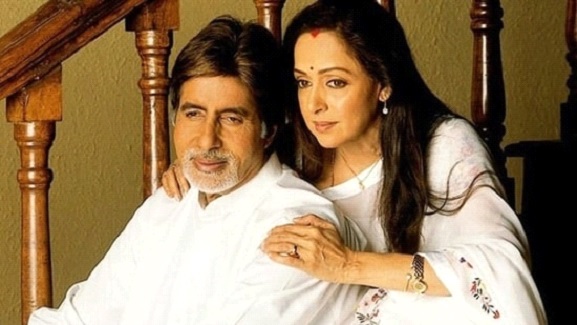 MUMBAI : Hema Malini spoke about Amitabh Bachchan in a new interview. Hema said the veteran actor, who turned 80 on October 11, saw her as a newcomer on the set of her 1970 film Abhinetri, which also featured Shashi Kapoor.
She said he was ‘so quiet’ on the sets, when they worked together for the first time, years later. Hema said she has not seen any change in Amitabh over the years. The actor-politician said Amitabh is still serious and grumpy sometimes.
Hema and Amitabh have worked together in films like Kasauti (1974), Nastik (1983), Desh Premee (1982), Naseeb (1981), Satte Pe Satta (1982) and Baghban (2003). The two also filmed together for a Kaun Banega Crorepati episode in 2021. Hema recalled their journey from their first film together to her working with him in her comeback film Baghban. She said he always manages to change the mood on the sets with his entry and persona.
“The first time we were working together, he was so quiet on the sets. Then slowly we started talking. It was the time he was meeting producers and directors for work (as a newcomer), and he told me that he saw me on the sets of Abhinetri (1970), where he observed me from a distance.
From then to now, we have done so many films together… It was after a small gap that I started working in Baghban. I was wondering ki main kaise kar paungi (how will I do this). I was nervous and told him about it. He told me, ‘don’t worry, I am also in the same boat as you, toh hum dono milke saath kar lenge (we will both do this together)’,” Hema Malini said.
Hema further spoke about how Amitabh was always ‘ready to explore’ unlike other actors from their generation. Hema added that despite all the success, Amitabh is ‘still the same’. “As an individual, he has garnered so much respect, affection and adoration, yet he’s still the same. I don’t find any change in him. His hair might have turned grey, but nothing’s changed. He is still very naughty, mischievous, and sometimes serious and grumpy.
He changes the mood on the sets with his entry and persona. I really feel fortunate that I have worked with him in so many beautiful films and I will always cherish the great box office hits we have given together,” Hema said.
Hema and Amitabh’s Baghban was directed by Ravi Chopra. It tells the story of an elderly couple, Raj (Amitabh Bachchan) and Pooja (Hema Malini), who have been married for 40 years, and face hardships after Raj retires as their sons refuse to take care of the parents. The film worked well at the box office, and was praised for the story and performances. The film also featured Salman Khan.