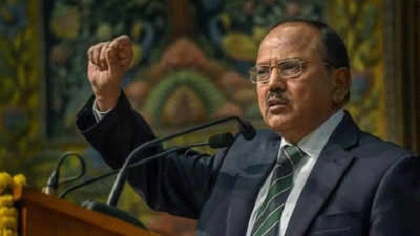 MOSCOW : As India continues to enhance engagement with Russia on regional and global issues, NSA Ajit Doval paid an unannounced visit to Moscow Tuesday to review progress and recent developments in bilateral ties.

Afghanistan, counter-terrorism, defence and food and energy security in the aftermath of the Ukraine conflict are among the regional and global issues Doval is likely to address in his meetings with Russian authorities, including his counterpart Nikolai Patrushev, during his 2-day visit to Moscow.

While there was no official confirmation of the visit, ToI learnt from sources the visit is in the framework of regular dialogue between the countries on “strategic bilateral, regional and global issues”. Despite the pressure from the West to not increase its crude import from Russia, India’s imports of both oil and fertilizers have gone up sharply in the past few months.

According to a Bloomberg report last week, Russia surpassed Saudi Arabia in June to become the second-biggest supplier of crude to India. The foreign ministry reiterated last week that India’s oil purchases will be guided by its energy security requirements.

The NSA will focus on counter-terrorism cooperation in his meetings, especially in the context of Afghanistan. Doval is also likely to participate in a meeting of the top security officials of SCO member-states in Uzbekistan on Thursday and Friday this week where again the situation in Afghanistan is likely to dominate the agenda.

Despite working with the government in Kabul on humanitarian issues, and reopening its embassy in Kabul, India remains concerned about the Taliban’s links with Pakistan based terror groups. Official sources here have cited a recent UNSC report to say that these groups continue to operate terror camps in Taliban rules Afghanistan.

The SCO meeting of NSAs will finalise the agenda for security-related issues that the leaders of SCO nations will focus in the upcoming summit next month in Samarkand. The possibility of an in-person SCO summit hasn’t been ruled out yet and if that happens the meeting will see PM Narendra Modi face-to-face physically with Chinese President Xi Jinping – for the first time since the ongoing border standoff with China stared in May 2020 – and also Pakistan PM Shehbaz Sharif.