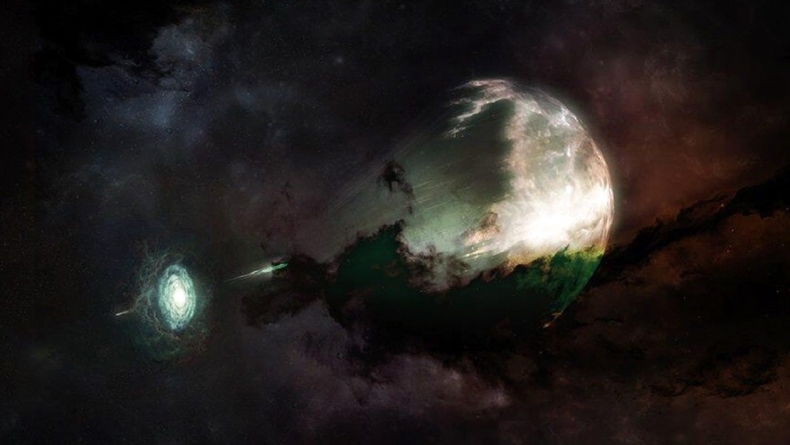 MELBOURNE : On Wednesday, astronomers presented us with a mysterious video: footage decked with lime green smudges steadily evolving on a dark background. But right at the center of this recording, one smudge isn’t like the others. It’s the brightest neon blob of all, and it enhances with each frame.
What you’re seeing is proof that some 20 billion years ago an ultrapowerful neutron star collided with a weaker star, spitting out an explosive, short-lived gamma ray burst, rippling gravitational waves across the cosmos and diffusing surrounding space with a potent afterglow. It was a shattering merger that occurred when the universe was at just 40% its current age, and our remarkable view of its incident is courtesy of the world’s largest radio telescope, the Atacama Large Millimeter/submillimeter Array situated in Chile.
More specifically, ALMA is a combination of 66 radio telescopes spread out across the high-altitude Chilean Andes. And they work together to bring us data about our universe’s violent side.
“Afterglows for short bursts are very difficult to come by, so it was spectacular to catch this event shining so brightly,” Wen-fai Fong, an astronomer at Northwestern University and principal investigator of the ALMA program, said in a statement. “This surprising discovery opens up a new area of study, as it motivates us to observe many more of these with ALMA and other telescope arrays in the future.”
The first-ever time-lapse footage of a short gamma ray burst’s afterglow captured in millimeter wavelengths by ALMA
Details of Fong and fellow researchers’ findings are soon to be published in an upcoming issue of The Astrophysical Journal Letters. For now, a preprint is available to view on arXiv.

An incomprehensible force of nature
Short-lived gamma ray bursts, like this one formally dubbed GRB 211106A, are some of the most intense, mind-bendingly strong explosions known to science. But in contrast to longer-lived ones, they remained a mystery due to their fleeting nature, until 2005, when NASA’s Neil Gehrels Swift Observatory collected data about one for the first time.
In a matter of seconds, these cosmic spurts can emit more energy than our sun will emit in its entire lifetime. Though such extremity makes sense for them, because these phenomena stem from binary star collisions that involve at least one neutron star, a hyperdense ball of gas that rivals even black holes in gravitational monstrosity.
Just one tablespoon of a neutron star would equal something like the weight of Mount Everest. 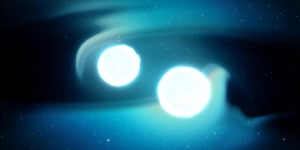 “These mergers occur because of gravitational wave radiation that removes energy from the orbit of the binary stars, causing the stars to spiral in toward each other,” Tanmoy Laskar, lead author of the study and an astronomer at Radboud University, said in a statement. “The resulting explosion is accompanied by jets moving at close to the speed of light. When one of these jets is pointed at Earth, we observe a short pulse of gamma-ray radiation or a short-duration GRB.”
That’s the vivid green blip we see in the recent burst’s recording.

ALMA’s expertise
The fact that the study team used ALMA to locate this particular burst marks the very first time such an event has been captured in millimeter wavelengths, the Chilean ‘scope’s specialty.

Although this dramatic collision had already been studied with NASA’s Hubble Space Telescope, it was seen only under the guise of optical and infrared light wavelengths. With those wavelengths, Hubble could basically only estimate information about the faraway galaxy this merger happened within, but not too much about afterglow that followed. Even if the agency’s groundbreaking James Webb Space Telescope one day embarks on a mission to investigate GRB 21106A, it’ll be restricted to infrared light wavelengths too, though on a much wider spectrum.
ALMA, on the other hand, could see something different than what Hubble did with its millimeter wavelengths — it indeed captured GRB 21106A’s afterglow. And after some deliberation, the new study’s team recognized that this short gamma ray burst’s afterglow is among the most luminescent ever seen. 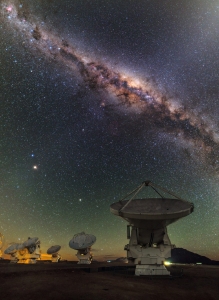 “What makes GRB 211106A so special is it’s not only the first short-duration GRB that we detected in this wavelength, but also, thanks to the millimeter and radio detection, we could measure the opening angle of the jet,” Rouco Escorial, study co-author and an astronomer at Northwestern University, said in a statement.

Down the line, such information could prove essential to inferring rates of such GRBs in our universe and comparing them with the rates of double neutron star mergers and perhaps even black hole mergers.
“ALMA shatters the playing field in terms of its capabilities at millimeter wavelengths and has enabled us to see the faint, dynamic universe in this type of light for the first time,” Fong said. “After a decade of observing short GRBs, it is truly amazing to witness the power of using these new technologies to unwrap surprise gifts from the universe.”