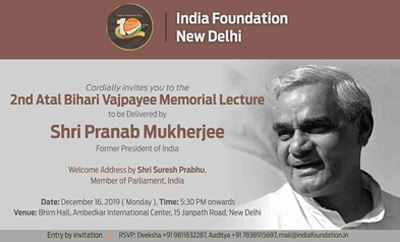 MELBOURNE : Ministry of External Affairs will be organising the second Atal Bihari Vajpayee Lecture on 24 December 2021. The lecture will be delivered by Dr. Michael Fullilove, Executive Director of the Lowy Institute of Australia. Foreign Secretary will preside over the event. The lecture will be on “Australia, India and the Indo-Pacific: The need for strategic imagination”

This is the second edition of this lecture series, which was instituted in memory of former Prime Minister and External Affairs Minister Late Shri Atal Bihari Vajpayee. Shri Vajpayee played an important role in shaping India’s Foreign Policy and this memorial lecture is a flagship event of MEA to recall his contributions.