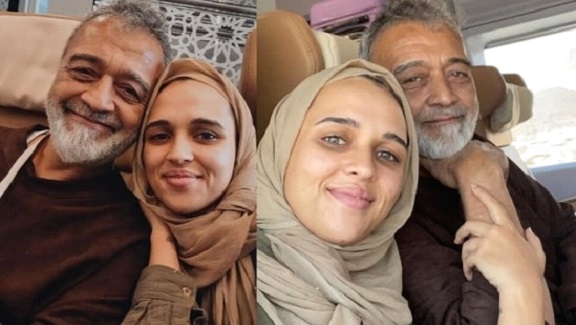 MEDINA : Singer Lucky Ali and his daughter Tasmiyah Ali recently travelled to Medina, Saudi Arabia, and gave their fans glimpses of their trip. Taking to Instagram, Lucky posted a picture and also a video as they travelled to the city in a bullet train.
In the photo, a selfie clicked by Tasmiyah, the father-daughter duo smiled for the camera. Tasmiyah held Lucky’s hand as they posed together inside the train. In the picture, Lucky wore a brown outfit while Tasmiyah opted for a grey and beige dress.
In the video, Lucky asked Tasmiyah, “How are you enjoying your journey?” She replied, “Very much. Very much enjoying it. This is like I’m in a movie (laughs).” Snacks in packets and beverages in cups were seen on trays near them.
Lucky captioned the post, “Father – Daughter time… on the bullet train to Madinah…” Fans showered them with love. A person wrote, “God bless u both..love and light, beautiful souls on a beautiful journey.” Another comment read, “Love you so much. May Allah bless you always sending lots of love blessings and prayers.”
Taking to her Instagram account, Tasmiyah shared a picture featuring the duo. In the selfie, Lucky and Tasmiyah smiled and leaned towards each other. She wrote, “Father and daughter, a very goofy duo.”
After reaching their destination, Tasmiyah held an Ask Me Anything session on Instagram. A fan asked her to sing Lucky’s iconic song O Sanam and she shared a video humming the track. Sharing the clip she wrote, “Excuse the eye bags.” She also gave a glimpse of her tattoo. When an Instagram user spoke against it, she wrote, “Colour me unorthodox.”
Tasmiyah is Lucky’s daughter from his first marriage. She also has a sibling Ta’awwuz. Lucky later married Inaya. They have two children – Sara and Raiyan. His third marriage took place in 2010 to British model Kate Elizabeth Hallam. They divorced in 2017. The couple has a son Dani Maqsood Ali.