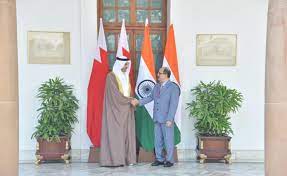 MoS Shri V. Muraleedharan fondly recalled his visit to Bahrain in August 2021 and expressed happiness at the increased high-level interactions between both countries which has led to further strengthening of bilateral relations. He also received Kingdom of Bahrain’s Instrument of Ratification of International Solar Alliance (ISA) from Dr. Shaikh Abdulla. MOS thanked the Leadership and Government of Bahrain for taking excellent care of the Indian community, including during the Covid-19 pandemic.

During the FOC, both delegations discussed all areas of bilateral cooperation and reviewed the progress made since the 3rd High Joint Commission meeting co-chaired by EAM and FM of Bahrain in April 2021 in New Delhi. Both sides expressed satisfaction at the continued momentum in bilateral ties despite the restrictions posed by COVID-19 pandemic. India and Bahrain celebrated the Golden Jubilee of establishment of diplomatic relations in October 2021. Both sides are looking forward to an early visit of His Royal Highness the Crown Prince and Prime Minister of the Kingdom of Bahrain to India.

Both sides agreed to further strengthen their cooperation in the fields of trade and investment, hydrocarbons and renewable energy, health and pharmaceuticals, IT, Fintech, food security, civil aviation, space, defence and security, parliamentary cooperation, culture, education and people-to-people connect focusing on youth, skill development and startups. Bilateral trade has shown upward trajectory and is likely to be the highest ever in F.Y. 2021-22 at more than USD 1.4 billion.

Both sides also discussed regional and multilateral issues of mutual interest. Dr. Ausaf Sayeed congratulated Bahrain on the successful year of Presidency of the Gulf Cooperation Council (GCC) in 2021 and on taking over the Chairmanship of Asia Cooperation Dialogue (ACD) in November 2021.

Dr. Shaikh Abdulla, who is also the Chairman of the Board of Trustees at the Bahrain Centre for Strategic, International and Energy Studies (DERASAT), will also meet and interact with scholars and members of Manohar Parrikar Institute of Defence Studies and Analyses (MP-IDSA), Observer Research Foundation (ORF) and India Foundation (IF). He arrived in New Delhi on 27 March 2022 and departed on 29 March 2022.