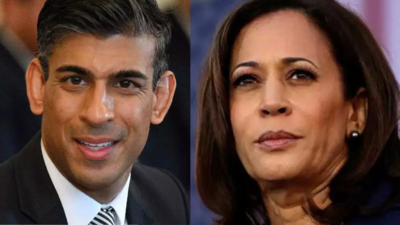 LONDON: Rishi Sunak recently made history by becoming UK’s first Indian-origin prime minister. But Sunak isn’t the only person of India origin holding a powerful position.
The 2021 Indiaspora Government Leaders List released by a US-based organisation working among the Indian diaspora stated that more than 200 Indian-origin people occupy leadership positions in as many as 15 countries – over 60 of them hold Cabinet positions.

Representing the interests of more than 550 million citizens, this powerful group demonstrates the rise of the diaspora as leaders in the political and government space.

Heads of government
Six countries are currently being led by men that can trace their ancestry to India:

He has been a Member of Parliament for Richmond (Yorks) since 2015.

Sunak was born in 1980 in Southampton to parents of Indian descent who migrated to Britain from East Africa in the 1960s. He is a practicing Hindu.
Sunak’s grandfatherwas born in Punjab province, British India.

He is the first Muslim president elected in Guyana.

He assumed office in August 2020.
He was born on April 25, 1980, into a Muslim, Indo-Guyanese family at Leonora, West Coast Demarara.

Costa was born in 1961 in São Sebastião da Pedreira, Lisbon.
Costa is half Portuguese and half Indian; his father was born in Maputo, Mozambique, to a Goan family.

He was elected in 2017. Jugnauth was born into a Hindu family on December 25, 1961, in La Caverne, a suburb area in Vacoas-Phoenix, Mauritius.
He is the son of Anerood Jugnauth, who served as former president and prime minister of Mauritius, and Sarojini Ballah, a schoolteacher.

Roopun is the seventh president of Mauritius and assumed office in December 2019.

He was born in 1959 into an Indian Arya Samaji Hindu family and grew up in Morcellement St. Jean, a suburb of Quatre Bornes.
Roopun served in the capacity of a minister in several ministries before being elected as the President.

In May 2020, Santokhi led his party to its biggest victory and was sworn into office on July 16 as the ninth president of Suriname.

India awarded him the ‘Pravasi Bharatiya Samman Award’ in 2021.
Santokhi was born in 1959, into an Indo-Surinamese Hindu family in Lelydorp, a district is Suriname.

Deputy heads of governments
There are three countries where the deputy head is a person of Indian origin:

1. Kamala Harris, Vice President of the US

She is the first female, Indian and Black American vice president of the United States. She assumed office in 2021. Harris was born in California in 1964 to immigrant parents: Shyamala Gopalan Harris, a breast cancer researcher from Chennai; and Donald Harris, an economist from Jamaica.

Kamala grew up with an influence for public advocacy from her parents who were student activists at UC Berkeley.
In 2016, Kamala Harris became the first Indian-American to serve as a US Senator.

Jagdeo was born in Unity Village in Demerara-Mahaica, in then British Guiana in 1964 to Hindu-Indian parents.
In 1912, his grandfather, Ram Jiyawan had immigrated to British Guiana from Uttar Pradesh.

Varadkar has been serving as Tanaiste and minister for Enterprise, Trade and Employment since June 2020. He was born in 1979 in Dublin.
Varadkar is the third child of Ashok and Miriam (née Howell) Varadkar. His father was born in Mumbai.

Other top positions
Besides being the heads or deputy heads of other countries, persons of Indian origin are also serving as members of a government’s cabinet and ministers, diplomats, ambassadors, and consuls general.
A total of 55 Indian-origin person are serving as cabinet ministers in nearly a dozen countries. Four more serve as additional ministers.

Another 63 people of Indian origin are members of parliament or federal legislators.

A total of 10 people of Indian descent serve as ambassadors of their respective countries, while another 2 represent their nations as consul generals.

Besides politics, people of Indian origin have also climbed to the highest ranks in judiciary systems across the globe. Four countries (Mauritius, Fiji, Singapore and Suriname) have Chief Justices of Indian origin.

Persons of Indian origin have also made their mark in the financial systems of various countries. Four nations (Fiji, Guyana, Singapore and Mauritius) have appointed Indian origin men to head their central banking system.

In the US alone, a total of 112 people of Indian origin are at top positions in the administration, including Neera Tanden who is a senior adviser to President Joe Biden.

Three people of Indian descent serve as judges in the US circuit courts of appeals.