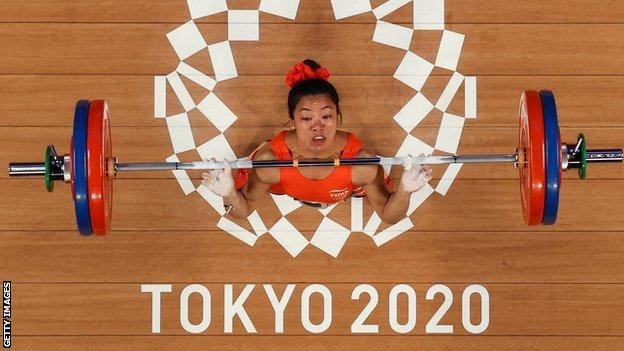 LONDON: Weightlifter Mirabai Chanu has won the BBC Indian Sportswoman of the Year award for 2021, following a public vote.

Chanu became the first Indian weightlifter to win a silver medal at an Olympic Games, when she finished second in the 49kg category in Tokyo.

In her reaction to winning the award, Chanu said: “I am currently training in the United States. I will give my best to win gold at this year’s Asian Games and Commonwealth Games. Thank you to BBC India for honouring me with the BBC Indian Sportswoman Of The Year award.”

Mirabai Chanu: ‘4am truck rides to training were the only way’

Born in Manipur state, in the north-west of India, the 27-year old learned her craft by carrying firewood from the hills to her home.

Chanu won the gold medal in the 48kg division at the 2017 World Championships in Anaheim, and followed up with Commonwealth Games gold in 2018.

Tim Davie, the BBC’s director general, who hosted the awards ceremony in New Delhi, congratulated Chanu, saying she is “a fantastic sportswoman and a deserving winner of the award”.

“It’s wonderful to be here in Delhi in the BBC’s centenary year, and to honour the talented Indian sportswomen who’ve achieved so much, often in the face of challenging circumstances,” he added.

The five nominees were selected by a panel of some of India’s most authoritative sports journalists, experts and writers, with a online public vote then deciding the winner.

The BBC Emerging Player award was presented to 18-year-old cricketer Shafali Verma, who has recently been playing at the Women’s World Cup in New Zealand.

In 2021, Verma became the youngest Indian cricketer, male or female, to play in all three formats for the national team.

“I hope to continue playing in the team for the next 20 to 25 years,” she said. “My aim would be to make the Indian team win as much possible.”

Karnam Malleswari, the first Indian woman to win an Olympic medal with her weightlifting bronze at the 2000 Games in Sydney, was presented with the BBC Lifetime Achievement award.

“After all the medals I have won, this award gives me a lot of motivation to work even harder,” she said. “I am very thankful to the BBC that it is honouring not only the current players but players like us as well.”

Several other sports personalities also congratulated the winners and nominees.

Neeraj Chopra, the men’s javelin Olympic champion, said: “Whether it is the Olympics or Paralympics, our women have always made the country feel proud.”

England cricketer Jos Buttler also sent a congratulatory message to the nominees, saying: “I have seen some great performances from Indian sportswomen in cricket and other sports. Women’s cricket has progressed a lot in India and Shafali Verma has the opportunity to be a role model for the next generation. BBC Indian Sportswoman Of The Year award is a great way of honouring female players.”

In this third edition of BBC Indian Sportswoman of the Year, the Olympians and the Paralympians from Tokyo 2020 were also honoured including the Indian women’s and men’s hockey teams.

Naveen Patnaik, Chief Minister of State of Odisha, which sponsors both the hockey teams, congratulated the players, along with Dr. Narinder Batra, President of International Hockey Federation.

The awards ceremony was attended by eminent personalities from sports, media, culture and the political world.