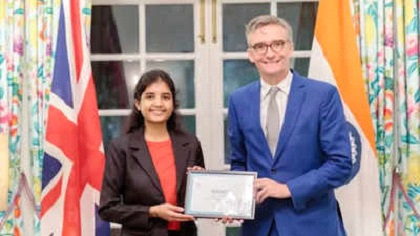 LONDON : Lucknow girl Jagriti Yadav spent a day as the UK’s top diplomat in India after winning the sixth edition of the ‘High Commissioner for a Day’ competition.

Graduate with a BSc in Physical Science with Computer Science from Delhi University, Jagriti met the Minister of State for External Affairs and Culture Meenakshi Lekhi, the Mayor of West Yorkshire Tracy Brabin, and the Executive Chairman of Wipro Rishad Premji.

Other highlights included interacting with project leads working on the Gender Advancement for Transforming Institutions (GATI) project at the British Council and beneficiaries of the Chevening-funded SheLeads project – a women leadership programme that helps aspiring female political leaders.

Alongside Professor Ajay Kumar Sood, the Principal Scientific Adviser to the Government of India, she also launched a book honouring 75 Indian Women in STEAM (Science, Technology, Engineering, Arts and Mathematics).

Jagriti Yadav, High Commissioner for a day, said “It was an intellectually inspiring experience to serve as the British High Commissioner for a day. My day was full of opportunities – discussions with established business leaders, a meeting with the Mayor of West Yorkshire and interacting with a leading female politician of India about significant obstacles to women’s professional advancement and the value of women as leaders.

“Meeting the SheLeads project beneficiaries and female STEAM role models was motivating, and I learned about STEAM engagement between the UK and India and the UK’s efforts to advance gender equality. The day gave me the opportunity to learn from a diverse perspective and, as a young woman, it gave me the confidence to be more determined and considerate towards the role of women in society.”

“The UK and India do a lot together to promote gender equality, including on research and education. I’m delighted that 50% of the Chevening scholarships for India this year were awarded to women. The UK is a world leader at incorporating gender equality in universities and India is a top country for girls studying STEM-subjects. I wish Jagriti the best for the future and hope she enjoyed being High Commissioner for the day.”

The British High Commission in New Delhi has been organising the ‘High Commissioner for a Day’ competition annually since 2017 to celebrate the International Day of the Girl Child (October 11). More than 270 young girls from all around India applied for this year’s competition.