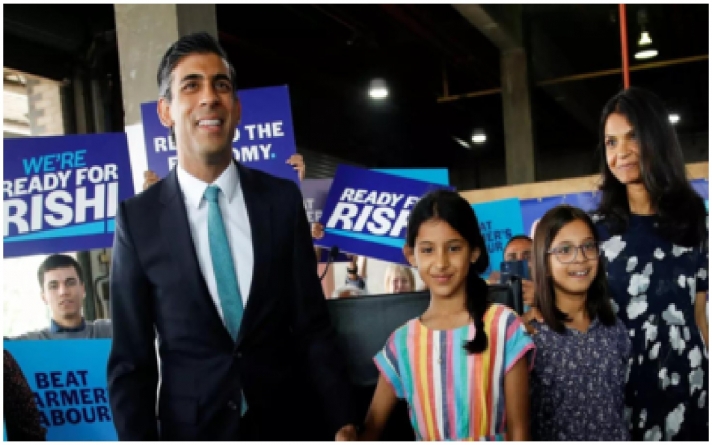 LONDON : Rishi Sunak on Saturday took aim at the “forces that be” of the Conservative Party that favour his opponent Liz Truss in the race to replace Boris Johnson as the next British prime minister as he branded himself the “underdog” in the Tory leadership race.

Sunak’s resignation helped trigger a revolt that saw Prime Minister Boris Johnson agree to step down after a series of scandals. Members of the ruling Conservative Party will vote for a successor over the summer, with an announcement due on Sept. 5.

Sunak led all rounds of the voting among party lawmakers to reduce the field to two candidates. But it is foreign secretary Liz Truss who seems to have gained the advantage so far among the 200,000 members of the governing party who will ultimately choose the winner.

Delivering a campaign speech at Grantham, the eastern England hometown of former Tory Prime Minister Margaret Thatcher, the former Chancellor said there was a section of the governing party that would prefer the election be more of a “coronation” of the foreign secretary.

It was an indirect reference to pro-Johnson Cabinet ministers, such a culture secretary Nadine Dorries and minister for Brexit opportunities Jacob Rees-Mogg, who are leading a pro-Truss drive and have sought to undermine Sunak’s campaign.

Truss held a 24-point lead over Sunak in a YouGov poll of Conservative Party members published on Thursday.

“Have no doubt, I am the underdog,” Sunak said, surrounded by supporters waving Ready4Rishi campaign banners.

“The forces that be want this to be a coronation for the other candidate. But I think members want a choice and they are prepared to listen,” he said during the key speech.

Truss would be only Britain’s third female prime minister after Thatcher and Theresa May, while Sunak would be the country’s first leader of Indian origin. 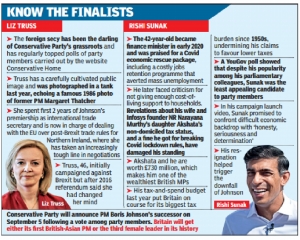 The British Indian ex-minister did not elaborate on who these “forces” actually are, but reiterated that he was not the favourite.

“I was talking generically, but obviously I start this part of the contest in the underdog position,” he told reporters afterwards.

Southampton-born Sunak, whose Indian grandmother migrated to the UK from east Africa in the 1960s, pegged himself as “a product of immigration” as he hit home the message about “compassion” but also “tougher” action on illegal immigration.

Amid applause, he also reiterated his central plank on the urgent need to “grip inflation and bring it down”, describing rising inflation as “the enemy that makes everyone poorer”.

“We have to tell the truth about the cost of living. Rising inflation is the enemy that makes everyone poorer and puts at risk your homes and your savings,” he said.

“Real change is there, I swear it,” he added.
Sunak was joined on his campaign visit to Thatcher’s hometown by wife Akshata Murty and daughters Krishna and Anoushka. He laughed off questions on whether the choice of Grantham in Lincolnshire was a coincidence, telling reporters he believes what he is proposing is “common sense Thatcherism”.

So far the campaigning focus has been on pledges, or non-pledges, to cut taxes at a time when many people are struggling, as well as defence spending and energy policy.

In his speech, Sunak laid out what he called “common sense Thatcherism,” promising careful management of the economy before tax cuts.
He questioned the morality of immediate tax cuts, proposed by Truss, at a time of soaring inflation and criticised as arbitrary her pledge to increase defence spending to 3% of GDP by 2030. 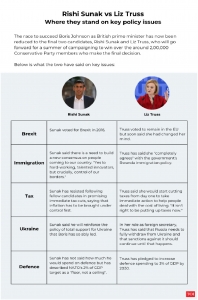 “It is wrong to take money from people that we don’t need to take when people across the country are struggling with the cost of living crisis,” she told reporters in Kent, south east England, after meeting party members.

In an interview for Saturday’s Times newspaper, Sunak said he would put the government on a crisis footing on taking office.

Truss has also promised to scrap all remaining European Union laws that still apply in Britain by 2023.