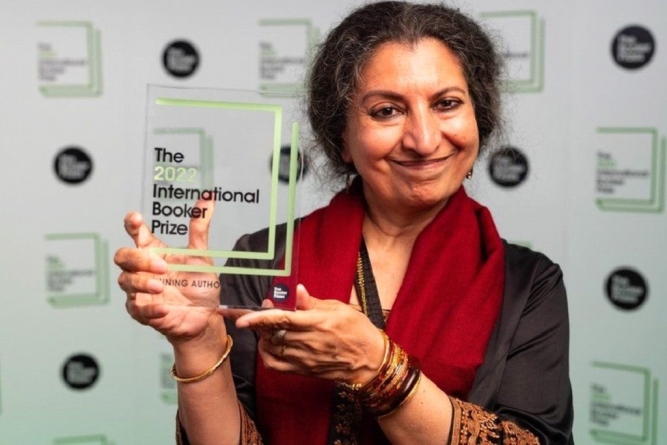 LONDON : Geetanjali Shree has become the first Indian writer to win the International Booker Prize.
Her novel Tomb of Sand, a family saga set in the shadow of the partition of India, follows an 80-year-old woman after the death of her husband.
It was the first Hindi-language book to be shortlisted for the £50,000 prize.
“I never dreamt of the Booker, I never thought I could,” Ms Shree said. “What a huge recognition. I’m amazed, delighted, honoured and humbled.”
In her acceptance speech, quoted by the Press Trust of India, she said being the first book in Hindi to win the prize felt good.
“Behind me and this book lies a rich and flourishing literary tradition in Hindi, and in other South Asian languages. World literature will be the richer for knowing some of the finest writers in these languages,” she said.
Frank Wynne, the chair of judges, said the panel were “captivated by the power, the poignancy and the playfulness” of her novel.
“This is a luminous novel of India and partition, but one whose spellbinding brio and fierce compassion weaves youth and age, male and female, family and nation into a kaleidoscopic whole,” he said.
He added that he had not read anything like it before, and its “exuberance” and “passion” make it a book “the world could do with right now.”
The prize money will be split between Shree and the book’s translator, US-based Daisy Rockwell.
The International Booker Prize is awarded every year for a book that is translated into English and published in the UK or Ireland.
This is different from the Man Booker Prize which is for English novels and has been won by Indians in the past, including Arundhati Roy and Aravind Adiga.
Shree’s 725-page novel competed against five other shortlisted titles, by Mieko Kawakami, Bora Chung, Jon Fosse, Claudia Pineiro and former winner Olga Tokarczuk. 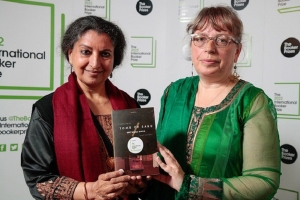 Born in the city of Mainpuri in Uttar Pradesh state, Shree, 64, is the author of three novels and several story collections. Tomb of Sand is the first of her books to be published in the UK.
Published in Hindi in 2018 with the title Ret Samadhi, it traces the transformative journey of Ma, who becomes depressed after the death of her husband. She then decides to travel to Pakistan, confronting trauma that has remained unresolved since she was a teenager who survived the partition.
“Once you’ve got women and a border, a story can write itself. Even women on their own are enough. Women are stories in themselves, full of stirrings and whisperings that float on the wind, that bend with each blade of grass,” Shree writes in the opening pages of the novel.
In a BBC interview, Shree said the novel tells human stories that are universal irrespective of their cultural backdrop.
“There are many stories that came together in the book… but it’s also the story of an old woman who gradually rose up from her deathbed to reinvent her life,” she said.
Tomb of Sand has received rave reviews in Shree’s home country. “The novel is a stunningly powerful story about stories that never end,”.

“All of human history, literature, art, thought, politics have been at the service of this tale that’s telling itself – and while it may often appear that Ms Shree is playing with words for the sake of word play, and that her digressions are asides, in the end nothing turns out to be self-indulgent or extraneous.”
Rockwell said Tomb of Sand was one of the most difficult works she had ever translated because of the “experimental nature” of Shree’s writing and “her unique use of language”. But she added that the experience was also “great fun” and “liberating”.