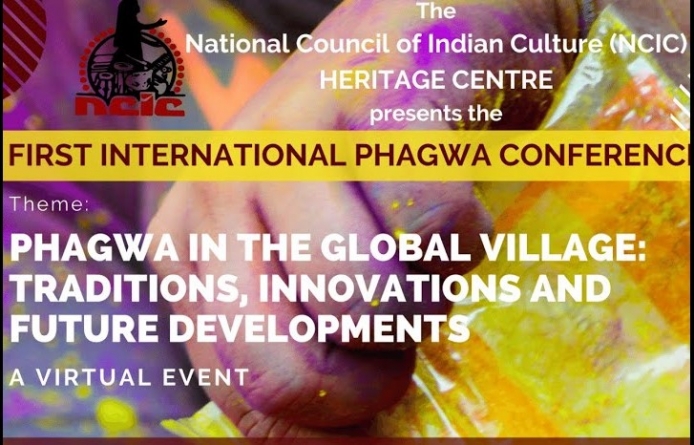 LONDON: THE grand festival of exuberant
colours and feelings is in the air. History was created when the National
Council of Indian Culture (NCIC) in Trinidad and Tobago triumphantly held
the first international Phagwa conference virtually on the 13th and
14th March, 2021.

This
programme amassed some 65 professional scholars assembled from around the world
to deliver a number of papers on various topics on Indian Diaspora, with the
theme based on “Phagwa in the Global Village: Traditions, Innovations and
Future developments.” Countries taking part included Guyana,
Trinidad and Tobago, Suriname, Jamaica, Grenada, USA, Canada, UK, India, Fiji,
Mauritius, South Africa, New Zealand and Australia. Speakers spoke on the
historical, religious, scriptural and cultural significance of this great
festival which will be celebrated this week-end, the 28th of March,
throughout the globe.

Comparisons
were made from the ancient customs and traditions to modern day practices and
an anticipation for the future generation attitude for their continuity and
maintenance.

It was
quite enlightening to learn about the methodology adopted in each of the
participating country from the respective speaker, sharing valuable information
about the common practices, choreographing all aspects of Phagwa and how time
has retained most of the inherited ways celebrating the occasion from India and
also the changes brought about from generation to generation.

Phagwa
was painted colourfully by all the presenters and some even discussed the
dangers, disadvantages and dislikes experienced by some disdained women, who
expressed disgust when engaged in the playing of the festival with some males,
perceived with disguised motives.

Many
panelists conversed on the planting of the Holika, the days leading up to
Phagwa, Holika Dahan, Phagwa day and the day after. The traditional and
non-traditional observances were enthusiastically explored and expounded in
glorious forms and shapes, educating and enriching the audience. Discussants
also traversed into Indian cultural anthropology and issues pertaining to
today’s society, affecting the Indian community in terms of political,
economic, social, cultural and religious positions.

According
to one of the organisers, Surujdeo Mangaroo, “While Phagwa has gained in popularity
over the years, few efforts have been made to study this festival from an
academic standpoint.”’ She added, “As many colours as there are in the festival
of Phagwa, or Holi, so too are the legends associated with it.

This
ancient Hindu festival is celebrated with the coming of spring each year.”
Inclusive in the agenda were films, poetry, songs and chowtals. The
romanticising of Phagwa was depicted through the journey of stories, the eyes
of the lens, the dancing feet and melodious voices.

There
were a total of five Guyanese who presented papers on various aspects of the
programme. Guyanese/American-based Electro-Cardiologist, Dr. Keshwar
Ramkissoon, set the pace and mood for the week-end when he introduced “Legends
of Holi,” laying the foundation for the spirit of the season, by divulging the
deep seeded religious aspect of Phagwa.

He
related the story of the Asura King Hiranyakashipu, his sister Simhika (Holika)
and his son, Bhakt Prahlad and the significance of the chronology and the
moral. Popular for his outstanding articles and writings in the Guyanese
newspapers, Dr. Vishnu Bishram, also a Guyanese residing in New York, expounded
on “Introduction and Evolution of Phagwa Celebrations in Guyana”.

The
second day witnessed the famous Guyanese past UG senior lecturer in Sociology,
Dr. Tara Singh, chairing Panel 8 dealing with “Developing Trends in the Phagwa
festival in India and the Indian Diaspora. The well-known philanthropist and
columnist/writer, both at home and abroad, also spoke on the subject, “Holi
Sammalian Celebration in New York.”

The ardent
and illustrious media commentator and writer, Shri Ravi Dev, brilliant for his
political, social and cultural reflections and work, participated in the Indian
Diaspora Round Table discussion along with Dr. Tara Singh, to wrap up the
weekend Phagwa presentation. Children were certainly not excluded and The
Conference Chair as the last speaker, Dr. Primnath Gooptar, who hails from
Trinidad and Tobago, presented his paper on “The children’s Phagwa in Trinidad:
passing on the tradition to the next generation.”

Noteworthy
was the bravery of the youngest presenter, 10-year-old daughter of Dr. Keshwar
and Prarthna Ramkissoon, who, on Saturday, accompanied her dad to read a poem
entitled, “Happy Holi,” written by her nana, Jai Lall.

Each
session was followed by a question and answer segment and one of the cumbersome
and controversial enquiries was made concerning ‘why Trinidad and Tobago has
not declared Phagwa a national holiday’. It was an internationally
well-organised and successful conference. Two resolutions were tabled by Sri
Deoroop Teemal and accepted:

1.
Be it resolved that the NCIC Heritage Centre continue to explore the role,
place and celebration of festivals in the Indian Diaspora, in order to ensure
continuity of research of these festivals and to establish relevant global
linkages and bodies that are sustainable.
2.        Be it resolved that the NCIC heritage
center establish a quarterly virtual forum for youth in the Indian Diaspora to
identify, research and discuss relevant issues and challenges and undertake
possible pathways and projects that will address the needs and concerns of the
Indian diasporic youth.