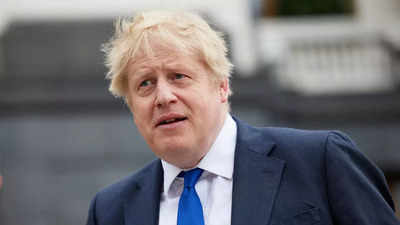 LONDON: British Prime Minister Boris Johnson has expressed his support for more skilled visas for Indians as part of the efforts to expedite the ambitious free trade agreement (FTA) being negotiated between the two countries.
Speaking to reporters from the UK on the prime ministerial flight to Ahmedabad on last Wednesday night, Johnson acknowledged a massive shortage of experts in IT and programming sectors and said Britain needed “hundreds of thousands” of workers with in-demand skills.

He was responding to questions around visas and free movement of people, which has been a key demand on the Indian side to clinch any FTA with the UK.

“I have always been in favour of having people coming into this country,” Johnson was quoted as saying by ‘The Independent’ newspaper.
“We have a massive shortage in the UK, not least in experts in IT and programming. We are short to the tune of hundreds of thousands in our economy. We need to have a professional approach, but it has got to be controlled,” he said.

According to the latest UK home office statistics, Indian professionals continue to account for the largest number of UK skilled work visas granted – with 67,839 issued last year, which is 14 per cent higher than 2019.

Indian student numbers have also registered a steady rise since the introduction of post-study work options under the UK’s post-Brexit points-based visa system.

Meanwhile, the third round of FTA negotiations is scheduled in Delhi for next week and Johnson has expressed his hope of concluding a deal by the end of this year, indicating autumn 2022 as a sped-up timeline while in India.

“Both countries have set out an intention to reach an agreement by the end of this year. It’s not a fixed deadline, we won’t rush it. We would take as long as it takes to reach a good deal for both countries,” his official spokesperson at 10 Downing Street said on the eve of his visit.

Downing Street has pitched the Prime Minister’s two-day visit to India as a “landmark” tour, which will yield more than GBP 1 billion in new investments and export deals in areas from software engineering to health, creating almost 11,000 jobs across the UK.

It is hoped that the meeting with Prime Minister Narendra Modi in New Delhi on Friday will “drive progress” in negotiations on the FTA, which is expected to help double our trade and investment by 2030.

According to the UK government, work is already progressing on “cutting red tape” for businesses following the UK-India Enhanced Trade Partnership launched by both Prime Ministers last year.