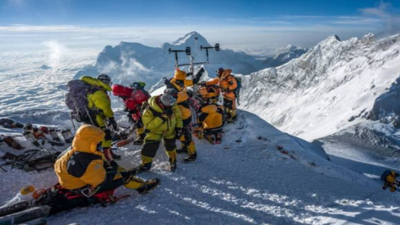 KATHMANDU: A team of experts from the National Geographic Society has installed the “world’s highest weather station” on Mt. Everest at an altitude of 8,830 metres to automatically measure various meteorological phenomena, the Nepalese media reported recently.

Nepal’s Department of Hydrology and Meteorology (DHM) said the automatic weather station was installed a few metres below the summit point (8,848.86 metres) as the snow and ice on the summit were not suitable for fixing equipment.

The NatGeo team, led by climate scientist Baker Perry from the Appalachian State University in the US, consisted of acclaimed climbers and scientists, many of whom scaled the world’s highest peak while installing the weather station.

The team spent a month in the Everest region of Nepal and also carried out the maintenance of other stations, including a station at South Col, The Himalayan Times reported.

The DHM and National Geographic signed a memorandum of understanding to operate all five Automatic Weather Stations installed by NatGeo to provide near real-time information regarding mountain conditions.

Under the MoU, the National Geographic team will fully operate the stations till 2025 before transferring the technology to Nepal government in 2026, the report said.

According to DHM officials, the team returned to Kathmandu after accomplishing the mission.

DHM’s Director General Kamal Ram Joshi said the DHM had requested the NatGeo team to transmit data directly to Nepal authorities without channelling it via the NatGeo servers, as it has been up until now.

A Chinese expedition had also installed an automatic meteorological monitoring system on the northern side of Everest at an altitude of 8,800 metres, the report said.