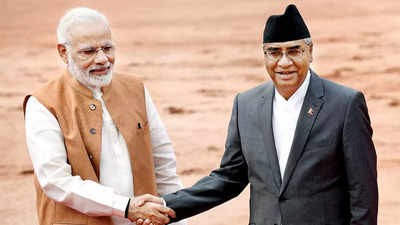 KATHMANDU: PM Narendra Modi and his Nepal counterpart Sher Bahadur Deuba will jointly inaugurate passenger train services between Jayanagar in India and Kurtha in Nepal, a stretch of 34.5km, through videoconferencing from New Delhi’s Hyderabad House on April 2.

East Central Railway (ECR) chief public relations officer (CPRO) Birendra Kumar on Thursday said the launch of the much-awaited rail services between India and Nepal would give further impetus to the bilateral relations between the two countries.

Kumar said the ministry of external affairs (MEA) had sanctioned Rs 784 crore for this ambitious project. “The first and second phases of the project between Jayanagar and Kurtha and Kurtha and Bijalpura, respectively, have already been completed. Work on the third phase between Bijalpura and Bardibas, a stretch of 69km, is in full swing,” he said.

The rail service between Jayanagar and Bijalpura in Nepal had been introduced for the first time in 1937 by the British. It was suspended in 2001 after the devastating floods in Nepal.